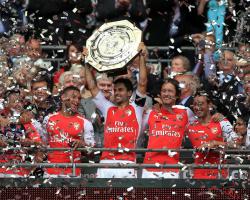 Back at the scene of their FA Cup triumph, the Gunners tore into a lacklustre City side - which saw Willy Caballero start in goal ahead of England's Joe Hart - and were in control by half-time through well-worked goals from Santi Cazorla and Aaron Ramsey, whose extra-time winner had beaten Hull on May 17 to end a nine-season trophy drought.

Substitute Olivier Giroud cracked home a third goal from 25 yards on the hour as City were subdued.

While Arteta - named as successor to Thomas Vermaelen after the former club skipper joined Barcelona - knows much sterner tests lie ahead, the Spanish midfielder feels Arsenal, with Â£30million Alexis Sanchez one of three new summer signings on display at Wembley, are in good shape ahead of next weekend's league opener against Crystal Palace.

"This is another trophy for us and that is important for Arsenal because we had a long spell without trophies," he said.

"It was a good test to see where we are ahead of the start of the Premier League and we had some points in the game where we looked really good.

"We were facing the champions and in some of the games last season against the top teams, we did not perform well.

"Today was a good opportunity to put that right and we have shown here that we can compete again.

"We want to progress from where we were last season, we want to continue winning things and to start the season like this can only boost the confidence, that we are going in the right direction."

Arteta added: "Last year we lost the first game at home, it was one of the lowest points of the club, afterwards we were able to put it right with a good run.

"This year, we can do something different.

"The players in the squad are top, top players and we are ready for a fight."

Former Everton midfielder Arteta had stood in for Vermaelen as captain when the Belgian was out injured last season.

The 32-year-old is ready to tackle the challenge of taking the armband permanently head on.

"Being captain is a big honour and a privilege, with a big responsibility," he said.

"I will try to stand up and do my best for my players.

"I have done it before last season when Thomas was injured, so I am used to it, now I just have to try make the best of my team-mates, the manager and the club."

He said on BBC Radio 5 live: "I think the message we wanted to send out was we are ready, it is the biggest game of pre season and we passed the test.

"Just because we beat the champions doesn't mean we will be champions because it doesn't work like that, but we are ready.

"We have got a great team ethic here and I hope we can take that into the season."