Arteta to remain at Arsenal despite interest from Fiorentina 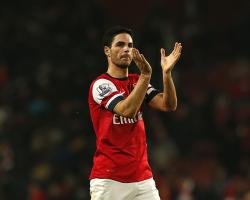 The 32-year-old Spaniard, who is under contract with the Barclays Premier League outfit for a further season, is a reported target of the Serie A outfit.

However, Arteta's agent Inaki Ibanez insists his client is staying in London.

"The player has no intention to leave London," Ibanez said to Italian radio station Radio Blu.

"We have not spoken to any club and I would like to remind everyone that we are talking about the Arsenal captain, with all respect for Fiorentina."

Arteta moved to the Emirates Stadium in 2011 following six years at Everton.

He also captained the Gunners in their 3-2 FA Cup final triumph over Hull in May.