​A customary scramble for Champions League football and shoddy away form continue to raise questions over Arsenal's season, but progress at the Emirates is clear after Unai Emery's first 50 games in charge.

The Gunners sit fourth in the Premier League with five games remaining heading into the weekend's fixtures, whilst Thursday's 1-0 victory away to Napoli saw the north Londoners advance to the the semi finals of the Europa League for the second consecutive season.

The clash in Naples marked Unai Emery's 50th game in charge of ​Arsenal, and his 32nd victory in that period.

Recent struggles on the road have led many to question just how far the Gunners have come under the Spaniard this season. Last Monday's 1-0 win away to ​Watford was just the second time Arsenal have won on the road in the Premier League in 2019.

The victory at Vicarage Road was only the Gunners' fifth away win of the season, and the first time they have kept a clean sheet on the road this term. However, if the sloppy away form tells of a struggling giant failing to move forward, the broader picture tells a different story.

Arsenal have the third best home record in the Premier League, having won just two fewer games at the Emirates this term than imperious reigning champions ​Manchester City have managed at the Etihad, with 14 wins from 17 home games in the league for the Gunners this term.

If Emery held the responsibility of upholding Arsene Wenger's mantle of imposing attractive and free-flowing attacking football this term, the Spaniard has certainly done so – Arsenal are also the third highest-scoring team in the league, only behind City and title-chasing ​Liverpool.

There is still much work to be done defensively though. Arsenal have conceded 40 Premier League goals this season, 20 more than Liverpool - but that stat alone does not fully illustrate Emery's work on the 'other side' of the game at the Emirates this term.

The 1-0 win at ​Napoli on Thursday showed impressive maturity and composure in the Gunners' game management. Many fancied that the Italians would ramp up their attacking engine in response to the feisty atmosphere at the Stadio San Paolo, but Arsenal had other ideas.

One of the greatest credits to Emery's reign so far has been his tactical diligence and pragmatism, as well as clearly structured and well-regimented game plans. 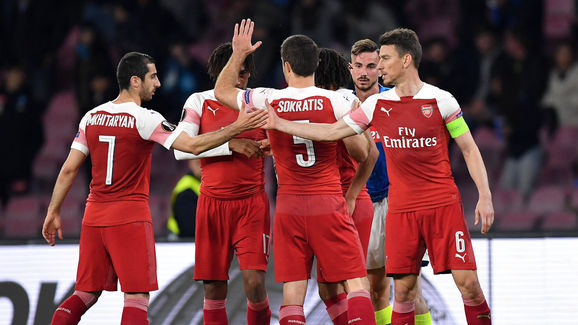 The Spaniard took criticism for a 'negative' team selection for the visit to Wembley to face ​Tottenham in February, but was quickly praised after the game for leading his side to a hard-fought 1-1 draw in a game in which few gave the Gunners a chance.

Thursday's performance showed similarly steely grit and determination to do the necessary and grind out a result, in a manner which many tend to suggest Arsenal are not capable of.

The 3-4-1-2 formation provided the perfect balance between defensive solidity and attacking prowess in the Gunners' setup, as Emery's side largely nullified Napoli's plentiful attacking threat and offered plenty going forward themselves in a tough environment,

The powerful presence of Sokratis Papastathopoulos in defence and the tenacious energy of Lucas Torreira in midfield have been key additions in strengthening previous problem positions through the Gunners' spine.

Likewise, the wing-back system has been utilised to decisive effect, with ​Sead Kolasinac and Ainsley Maitland-Niles both coming on leaps and bounds as tailor-made outlets to offer attacking threats, natural width and defensive cover on the flanks.

The Gunners no longer appear so open and exposed in crucial areas of the pitch, as Emery's system provides greater cover and discipline in places where Arsene Wenger's team were previously torn apart at times. 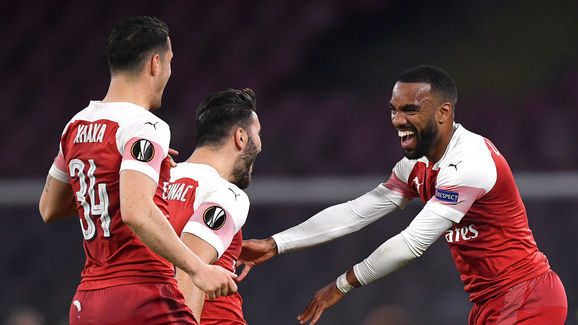 Emery has also shown great coaching ability in terms of management. ​Mesut Ozil and Granit Xhaka were generally the two players within the Arsenal ranks most regularly derided from virtually every angle in previous seasons at the Emirates.

However, this season, Emery has yielded results from Xhaka's clear potential, guiding the Swiss international from an error-prone under-performer to a consistently vital cog in the Gunners' engine room.

Meanwhile, the Spaniard's omission of Ozil from a succession of matchday squads around the turn of the year sparked widespread suggestions that the mercurial German's Arsenal career was virtually over, as he apparently did not meet the criteria of Emery's meticulous demands.

However, having spoken of wanting a reaction from Ozil in leaving the playmaker out, Emery's tactics have certainly paid off. The World Cup winner is back in favour once more and playing some of his best football in an Arsenal shirt to date at a crucial point in the season.

Up front, ​Pierre-Emerick Aubameyang and ​Alexandre Lacazette have consistently proven to be among the most potent strike forces in the Premier League this season.

Emery's decisions on whether to play the star duo together in attack or which of the two to pick with only one up front have drawn a lot of commentary, but the Spaniard's management of his strike force has proved well-judged.

46 - Since his debut for Arsenal in August 2017, Alexandre Lacazette has had a hand in 46 goals in all competitions (33 goals, 13 assists), more than any other player for the club. Spearhead. pic.twitter.com/smYd5Gzc9X

Lacazette did not feature in the victory over Watford last Monday, when Aubameyang scored the winner. Three days later, the Frenchman's strike decided the game in Naples, whilst Aubameyang remains Arsenal's top scorer and in the race for the Premier League's Golden Boot.

Having spent just £70m over the course of his first season in charge, in which he has succeeded Arsene Wenger's 22-year reign at the club, Arsenal's progress under Emery this term is clear. 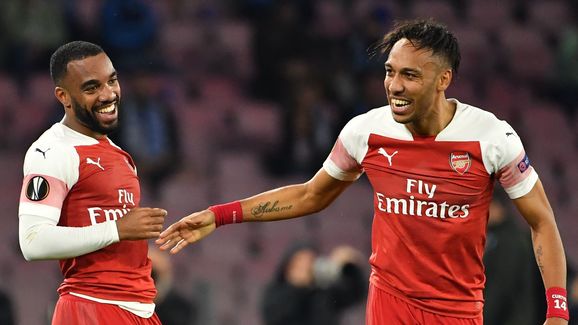 The legendary Frenchman won nine fewer matches than Emery during his first 50 games in charge, and the Gunners already have three more points in Premier League this term than they had by the end of the campaign last term, with five games still to play.

After less than a season under the Spaniard's reign, Arsenal are already showing considerable improvements with Emery at the helm.

We never feel alone, but we are looking forward to seeing you all at the Emirates on Sunday! We are the @Arsenal ! Forward together! pic.twitter.com/rS0mPYPrBT

Regardless of how the Gunners' top four challenge and Europa League quest pans out over the remainder of the season, it has already been a successful campaign in many respects, and there is surely only more to come.