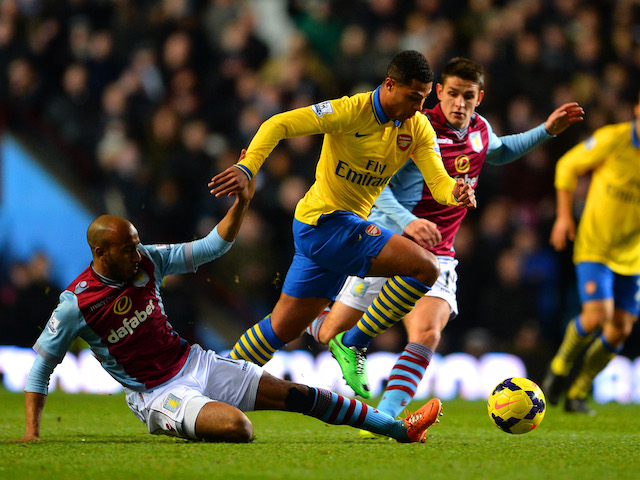 The first half saw Arsenal dominate play against a Villa team short on confidence and unable to keep possession for any length of time. It was just a matter of time before Arsenal scored, which they did twice in less than a minute.

Nacho Monreal broke free on the left and found Jack Wilshere, who coolly kicked the ball into the corner. Just after the restart, Wilshere stole the ball off a Villa player and sent in a cross for Giroud, who collected the tricky ball and scored the second and decisive goal.

The second half changed dramatically as Villa upped their workrate and tempo and Arsenal dropped theirs. Instead of going for a third goal and killing Villa off, Arsenal relaxed and played cute.

A Cazorla giveaway led to a Villa cross and a Benteke diving header that beat Szczesny. Suddenly, Arsenal had to defend and much of it was white knuckle time.

Villa never seriously tested Szczesny, but Arsenal still had to make many lunging clearances and defensive headers, all in the knowledge that any slipup would be fatal.

In the end they won ugly, but they won. Given that they had a little extra time to prepare for the game, they should have put in ninety solid minutes of effort. In the end, as a viewer, I felt exhausted and also a little annoyed, that they hadn’t seen the game off earlier.

Szczesny  6.  Most of the Villa shots missed or where right at Wojciech. He couldn’t really be blamed for the goal.

Sagna  7.  A solid game from Bacary, who kept his side of the field quiet defensively, as well as put in a solid attacking shift. Crossed the ball well several times.

Mertesacker  7.  Lost track of Benteke once and he scored. Otherwise he had an excellent game, helping to keep Arsenal’s defence solid to the end.

Koscielny  7.  A good game from Laurent. Made a fine intervention to stop Agbonlahor in the first half.

Flamini  7.  One of the main reasons why we dominated the midfield. His defensive work was tireless.

Wilshere  8.  Man of the match. Scored the first, setup the second. However, his performance in the second half paled in comparison to the first half and he seemed effected by the general malaise that hit the team.

Ozil  6.  A disappointing game from Mesut. Not sharp and had several misplaced passes during the game.

Gnabry 7.  A powerful smashing shot of his sent one of the Villa players to the hospital. Worked hard and seemed eager to attack.

Cazorla  7.  Played well at times, had a couple of shots, but he too became careless in the second half. His mistake was punished by Villa and led to their goal.

Giroud  7.  Scored his twelfth of the year. Missed a fairly easy header early in the game. He worked hard and did link up with his teammates.

Gibbs  7.  Got forward a number of times and he helped to defend and protect the goal toward the end of the match.

Rosicky 5.  Wasn’t able to turn the team around. Only lasted about ten minutes before a blow to the head ended his evening on the pitch.

Oxlade-Chamberlain  6.  Helped to see out the game. Looks full of energy, although it wasn’t hard to look energetic next to the rest of the tired squad.