Bayern best in the world - Wenger 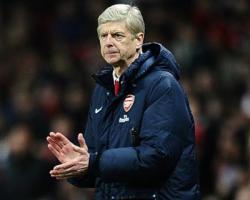 The Gunners welcome Pep Guardiola's all-conquering side to their Emirates Stadium home in north London for an eagerly-anticipated last-16, first leg tie on Wednesday

Arsenal were knocked out of the Champions League by Bayern at the same stage of the tournament on away goals last year.

Since then, Bayern have gone from strength to strength and have only lost twice this season, to Borussia Dortmund in their domestic Super Cup and to Manchester City in the final group stage match of European club football's elite competition in December

A year ago, though, it could have been all so different had Wenger's men not suffered a hefty 3-1 first-leg loss on home soil which effectively ended their hopes of reaching the quarter-finals before recording a remarkable victory in the return fixture in Munich

And Arsenal manager Wenger says his side, who are still chasing trophies on three fronts after beating Premier League title rivals Liverpool in the fifth round of the FA Cup on Sunday, are primed to match fire with fire against the German giants.

"Last year, I believe we went out on the away goal," the Frenchman told a news conference at Arsenal's training ground on Tuesday.

And we are really determined to win tomorrow.

"We know we face the favourites of the competition

They (Bayern) win every game

They have won the World (Club) Cup and the European Champions League, so you can only say yes (they are the best team in the world)

"But we have belief because we have only had big games in the Champions League and the FA Cup -- Tottenham and Liverpool," Wenger added.

"I believe we can do it but that is down to tomorrow."

While Arsenal and Bayern possess an abundance of quality in attacking positions, Wenger believes the Gunners' defence will prove as important if the Londoners are to reach the last eight

Wenger, who is expected to recall Tomas Rosicky with Mikel Arteta ruled out through suspension, added: "With the qualities of the players on both sides it is virtually impossible to play without style

"Football is not a chess game

"We have been strong at home recently because we don't give goals away and that will be important in this tie."

Jack Wilshere, the Arsenal midfielder, echoed his manager's comments and believes his team-mates must be more streetwise as they bid to topple Bayern.

"The Champions League is the pinnacle for any player and these are the games you want to be involved in and we will definitely be ready tomorrow," Wilshere said.

"We have spoken about the importance of staying in the game

The away goal is massive, especially in this competition when it comes to these big games

Defensively we are confident and we know we can create chances with the players we've got."