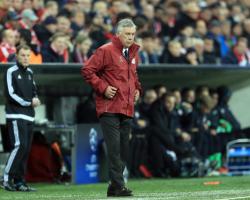 In the 2005 final, Ancelotti's AC Milan lost on penalties against Liverpool despite leading 3-0 at half-time, while a season earlier they blew a 4-1 first-leg lead to crash out to Deportivo La Coruna in the quarter-finals.

Now the 57-year-old takes Bayern to face Arsenal in London after thrashing the Gunners 5-1 in the first leg of their last-16 tie at the Allianz Arena last month - and the former Chelsea and Real Madrid boss is in no mood for another turnaround.

"I want to forget but I'm not able to forget," he said of those previous losses.

"This is the beauty of football because in football you never know and I think that experience was good for me to avoid this kind of problem.

"Tomorrow could be a good moment to show we are focused from the beginning and that we want to win.

"We don't take into consideration the advantage we have, it is important but the most important thing is to play well for 90 minutes.

"We want to play a good game at our best, avoid problems and use our style, our identity, our quality to try to win."

Ancelotti insists he will name his "best team" for the second leg as he believes Arsenal's recent poor form could spur the Gunners on to a strong performance against his side.

The Premier League outfit have lost four of their last six games in all competitions and manager Arsene Wenger is under increased pressure to leave the club when his contract expires in the summer.

But Ancelotti is wary of a wounded animal and sympathised with Wenger's current plight.

"Tomorrow, if the team are in a good moment like us maybe it could be a problem this kind of game because if you are not playing you go a little bit down," he said.

"For a team that has problems this game could be a good opportunity to solve those problems."

Asked about Wenger's situation, he added: "I think that we have to live our job with critics sometimes but the most important thing is you have to be able to consider the right critics.

"Wenger is a manager with a lot of experience, more experience than others, and I'm sure he will be able to react and manage this moment and situation.

"This can happen to many manager so critics are normal

I sympathise with him as a manager and a man, I have a good relationship with him.

"I have of course a lot of respect because not all managers would be able to do what he did here in this club."