Bellerin urges Gunners to push on 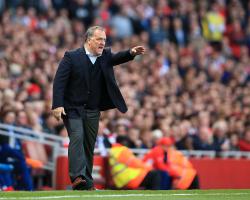 The Gunners failed to score for the third successive home match when Sunderland battled to earn the point they needed to secure Barclays Premier League safety on Wednesday night.

Despite the disappointment of again not being able to make their dominance of some 75 per cent possession and 28 shots count against the Black Cats, Arsenal are all but secure in third place for automatic Champions League qualification, three points ahead of Manchester United, who have an inferior goal difference.

Bellerin believes a solid performance against West Brom, who beat champions Chelsea 3-0 at home earlier in the week, can give the squad just the tonic needed ahead of their showdown with Aston Villa on May 30.

We need to push a bit harder and be a bit more efficient in front of goal," said the 20-year-old Spaniard.

"We are definitely fully focused on the league, finishing third was really important so we are straight in the Champions League.

"We need a bit of momentum for the FA Cup final so it is important we get the three points against West Brom."

Arsenal midfielder Jack Wilshere made his first start since November.

The 23-year-old is expected to be included in the England squad for the end-of-season internationals and hopes to make the most of his late opportunities.

"I have come on in three games so I was getting a little bit frustrated as I wanted to play, but I am thankful for the boss playing me," Wilshere said.

"I am a footballer at the end of the day, I want to get on the pitch and show what I can do

But I understand the team were playing well so I had to be patient."

While Arsenal fans were left frustrated at the final whistle, the travelling supporters packed into the corner of the Clock End rejoiced wildly, with manager Dick Advocaat moved to tears following what was a remarkable achievement under his short tenure.

Midfielder Seb Larsson, who used to play for Arsenal, hopes the Wearside club can move on to better things next season, when it remains to be seen whether Dutch coach Advocaat will extend his stay at the Stadium of Light.

"I think the emotion of the last few weeks and what is at stake gets to you as well," the Swede said.

"It is hard to get it out of your head and we felt it all week, so it is nice to get rid of it now because it gets you more tired, but that doesn't matter now and we are all relieved."

Larsson added on the club's official website, www.safc.com: "It is a massive relief to get ourselves out of the situation and obviously we are all very happy, but relief is the big word.

"We all want the same thing and we are all in it together; the fans have supported us tremendously throughout the season even though we haven't given them much to shout about.

"Hopefully we have at least given them a half-happy summer."