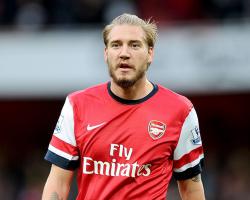 Denmark striker Bendtner made the last of his 171 Gunners appearances in February, after season-long loan spells at Sunderland and Juventus in recent years.

The 26-year-old scored 47 goals since his 2004 arrival as a 16-year-old, but his early potential was never fully realised and his final days at Arsenal were marred by off-field indiscretions.

"Arsenal can confirm that 11 players will be leaving the club when their contracts officially expire on June 30," a statement on arsenal.com read.

"Nicklas Bendtner and Park Ju-young come to the end of their contracts, while Kim Kallstrom and Emiliano Viviano's loan spells are set to conclude.

"Everyone at Arsenal would like to take this opportunity to thank all of these players for their contribution to the club, and to wish them well for the future."

Kallstrom signed in January on loan from Spartak Moscow, but injury limited his impact as he made one start and three substitute appearances for the 2014 FA Cup winners.

Palermo goalkeeper Viviano did not feature for the Gunners' first team during his spell at the club.