Bilic- It will be tough for Arsenal 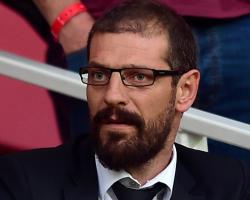 Following a 0-0 draw in Turkey, Alexis Sanchez's first Gunners goal on the stroke of half-time was enough to settle the contest and send Arsene Wenger's side into the group stages for the 17th consecutive season.

As in the away leg, Arsenal had to play for some of the match with 10 men as Mathieu Debuchy picked up two yellow cards - with the France international, as well as Jack Wilshere, lucky not to concede first-half penalties.

Having been a match for their opponents for much of the two legs, Bilic believes that Arsenal must improve to stand any chance of mixing it with the usual contenders for the title.

"I would love it because it would make us look like contenders," he said when asked if Arsenal could go all the way to the final in Berlin.

"If they improve (they have a chance), and of course they are going to improve, the league just started and they have got a few injuries.

"They are missing the strikers although Sanchez was good tonight

But to win it? With Bayern and Real Madrid? Football is strange but it would be difficult."