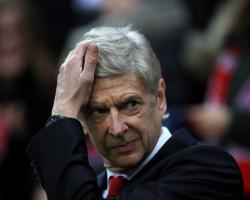 Now last night's humiliation at the Allianz Arena leaves them on the brink of a seventh consecutive Champions League exit at the last-16 stage.

Wilson, who played more than 200 games for Arsenal and was goalkeeping coach under Wenger before retiring in 2003, told BBC Radio 5 Live: " The big question now is, is this going to tip Arsene over the edge?

"He's a hugely intelligent man; he can only take so much

"He lives for the club, totally dedicated, very hurt when things go wrong

But as everybody knows and everybody sees now, his longevity in the job, 20 years, seems to be a little bit like a millstone round his neck when things go wrong

"I wouldn't be at all surprised if Arsene, given the amount of headlines that are coming his way, might just look at that and say enough is enough

I think as a human being you can only take so much."

Wenger is out of contract at the end of the season, and Wilson added that rival managers have now caught up with the Frenchman's methods.

"He's a very sensitive guy, and I was there when he arrived, saw that there was something different," Wilson continued

"But of course you can argue now that other people have caught up.

"He will be so hurt by this that I doubt very much whether he will sleep between this and a horrible game on an artificial pitch at Sutton on Monday night."

While Wenger's future has been called into question, Wilson believes the players must shoulder their share of the blame for Wednesday's defeat.

"This was as much about Arsenal's fragility, particularly when put under the cosh, as Bayern's brilliance," he added.

"They've won their last 14 home Champions League games, they're Bundesliga leaders, they are a brilliant side.

"But apart from the 20-minute spell when Arsenal came back to 1-1, when in fact Arsenal had two great chances, it was then a horror story, a total horror story

"You have to point the finger at the players

When it comes down to a serious defeat, a really bad defeat, a capitulation almost, you have to look at the players