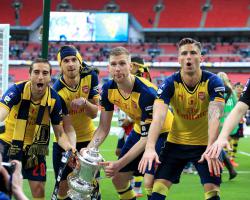 "I listened to Theo Walcott's interview and I agree with him (that) we're not that far away," Brady told BBC Radio 5 Live's Sportsweek programme

"Wenger will know that better than anyone and hopefully he'll improve things that bit more in the summer with signings and we really can challenge.

"But I wouldn't put a time scale on Arsene Wenger."

"You have to consistently get results (to win the Premier League) and I'm afraid the 12 points Chelsea got in front of us happened at the very start of the league," added Brady, who made 307 appearances for the Gunners between 1971 and 1980

"If you look at the results since the turn of the year, if they can replicate that at the start of the season I think we're in for a very exciting time."