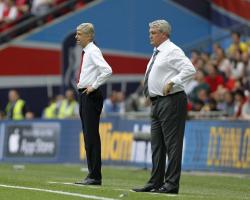 The Hull boss crosses swords with Wenger's Gunners at the KC Stadium on Monday as they look to secure Premier League safety, and Bruce says Arsenal fans are lucky to have the Frenchman at the club.

There were banners at the Emirates Stadium before Christmas calling for Wenger to leave and further discontent emerged after the 2-1 defeat to Tottenham and Champions League loss to Monaco in February, but since then Arsenal have been unbeaten and have secured another FA Cup final appearance.

Bruce, whose Hull side have given themselves a huge chance of avoiding the drop after consecutive 1-0 wins, said: "I find that quite astonishing

He has been a main problem, for us British coaches

The introduction of Arsene Wenger was one of the first (overseas bosses) 18 years ago, he has been in the top four for the last 17 years, won three Premier Leagues, five FA Cups, they are in the final of the FA Cup again and still people question him.

If he can get a bit of stick, maybe we are all due it because how you can question him is beyond me.

"His first team was big and physical, they were immense, then he had the team that went unbeaten for 49 games, it's quite remarkable for what he has done.

They do things in the right way, they play in the right way and he has been the demise of many British managers - for a time everyone thought 'we will go and get the new Arsene Wenger'."

Bruce says Hull cannot afford to relax even though they are on 34 points - there are also tough matches to come against Tottenham, Burnley and Manchester United.

He added: "I still think we need a couple of results

It's all still to play for - it's exciting if you are watching from afar but if you are involved in it you have to come out fighting.

"We have seen how competitive and difficult the league is, but back-to-back victories gives us a fantastic chance when a lot of people a week ago were writing us off."

Bruce is expected to keep the same line-up as the side that beat Liverpool on Tuesday but Croatian striker Nikica Jelavic is likely to be on the bench after a knee injury.