Burnley vs Arsenal Preview: How to Watch on TV, Live Stream, Kick Off Time & Team News

After differing fortunes in the FA Cup last time out, Burnley and Arsenal turn their attentions back to the Premier League ​on Sunday, with only goal difference separating the two sides in the league prior to their Turf Moor meeting.

Despite bowing out in the fourth round against Norwich, the Clarets have enjoyed a remarkable upturn in fortunes in recent weeks.

After a poor run of results that saw them hurtle towards the relegation zone, Sean Dyche's side stopped the rot in the most unlikely of ways, with back to back wins over high flying Leicester and Manchester United at Old Trafford.

However, if they are to record a hat-trick of Premier League wins on Sunday, Burnley will have to overcome a side they have not beaten in the league since 1974.

Arsenal booked their place in the FA Cup fifth round last time out, and could move to within a point of fifth place with victory at Turf Moor.

Following three straight draws in the league, Mikel Arteta's side are on the hunt for their first league win since New Year's Day, as they continue to find their rhythm under their new manager.

Where to Watch on TV

​Burnley's new £9m signing from Bristol City, Josh Brownhill, is unlikely to be thrust straight into the starting XI, but is expected to be in the squad on Sunday.

Ashley Barnes is still unavailable as he recovers from surgery on a hernia problem, and Arsenal have quite some record against Burnley. ​'Bogey team' doesn't quite do the Clarets' remarkable losing streak against the Gunners justice - Arsenal have won the last 11 meetings in all competitions between these two sides.

Burnley's last win over Arsenal came back in December 2008 in a League Cup tie. The Clarets have not tasted league victory over Arsenal in the Premier League era, with their last league win coming in September 1974.

Arsenal won the reverse fixture 2-1 in August thanks to goals from Alexandre Lacazette and Pierre-Emerick Aubameyang either side of an Ashley Barnes strike. Burnley go into the game off the back of two hugely impressive Premier League wins over Leicester and Manchester United, which saw them halt their run of four consecutive league defeats.

Here's how the pair have fared in their last five. 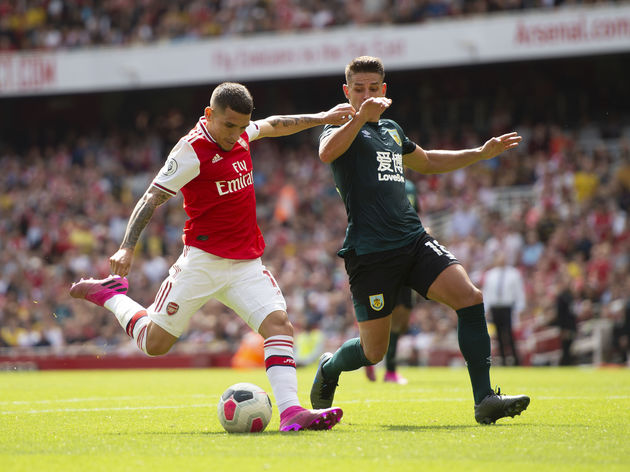 Burnley have turned their season around with two massive wins in their last two Premier League outings, while Arsenal have won just twice on the road all season. The Gunners have been drawing games for fun under Arteta, and it seems the most likely outcome again on Sunday.

If it does finish all square, this will be Burnley's first draw since their match against Aston Villa on 28 September finished 2-2.