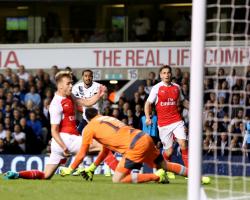 A brace from midfielder Mathieu Flamini, including a superb 25-yard volley late in the second half, at White Hart Lane proved enough to seal a place in the fourth-round draw, which will see the Gunners head to Sheffield Wednesday

The end of the match, however, was overshadowed by disturbances which saw a minority of the travelling supporters in the corner of the South Stand ripping down hoardings of Tottenham club slogans, with police and stewards forced to intervene

Arsenal are aware of the incident and say they will work with Tottenham and the authorities in an attempt to identify those individuals responsible, who could face banning orders

Some 10 arrests were made by the Metropolitan Police at the match for offences including public order, assault and criminal damage

Back on the pitch, Chambers believes the performance of Arsene Wenger's team, which saw several changes from the Barclays Premier League defeat at Chelsea, shows the players have the character needed for the challenges ahead, with a trip to Leicester at the weekend swiftly followed by a home Champions League tie with Olympiacos

"You want to get good results and build up momentum so hopefully we can take what we learnt into the next game," said Chambers, who had deflected in an own goal for Spurs' equaliser

"We were 1-0 up and then they came back to 1-1 so I think we showed a lot of character to keep our faith, keep our composure, keep playing and get the result by getting a goal to get the win."

They fell behind to a close-range effort from Flamini midway through the first half when goalkeeper Michel Vorm fumbled a shot from Alex Oxlade-Chamberlain back into the six-yard box, but Spurs rallied following the restart and levelled when Nacer Chadli's low cross was diverted past David Ospina at the near post by Chambers

Spurs defender Eric Dier, though, admits the defeat was a tough one to take for players and supporters alike

"We did well in this competition last year and we said before the game that we wanted to go one step further," he said

"We got ourselves back into the game at 1-1

When we got the equaliser the crowd really got behind us and we were pushing, so it was disappointing to concede that goal late on