Spells with Arsenal and West Bromwich Albion early in his career mean that Carlos Vela is already well-known by English football fans, ​but now the 30-year-old is making a name for himself on the other side of the pond with a string of outstanding performances in North America.

Vela joined the newly-formed Los Angeles FC as a Designated Player in 2018 and has been a revelation in Major League Soccer. The Mexican international is so good in fact, that he's just broken the league's record for most goals in a season - taking his 2019/20 tally to a remarkable 34 goals after scoring a hat-trick against Colorado Rapids.

Incase he's slipped under your radar, here's six things to drill into the memory bank about Vela..

1. He's One of Only Ten Players to Win La Liga Player of the Month at Least Twice Vela is one of only ten players to win the La Liga player of the month award at least twice, having picked up both awards during his time with Real Sociedad.

He first picked up the gong in December 2013 and then again in November 2014. Only Antoine Griezmann, Lionel Messi, Cristiano Ronaldo and Luis Suarez have won it more times.

2. He Won the Golden Boot During the FIFA Under-17 World Championship 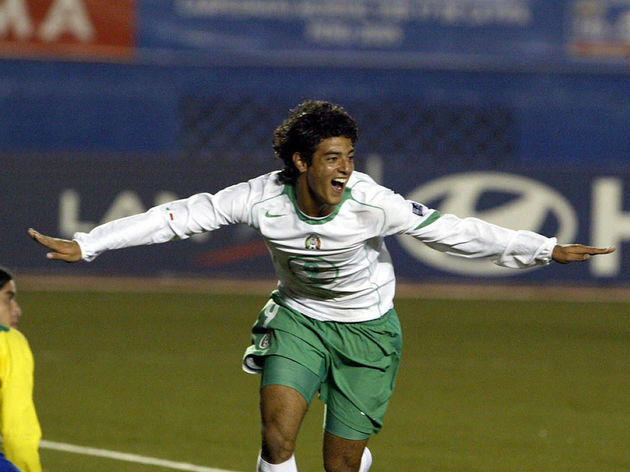 The Mexico international has won 72 caps at senior level, scoring 19 goals since he made his debut at the highest level in 2007. Prior to that, Vela won the 2005 FIFA Under-17 World Championship and, having scored five times in the tournament, also picked up the Golden Boot.

3. He Failed to Make the Grade at Arsenal Vela spent in seven years plying his trade in England, but was rarely given an opportunity to shine at Arsenal.

He made just 62 appearances under Arsene Wenger, scoring 11 goals in the process - but he failed to nail down a regular spot despite showing initial promise. He had five loan spells away from the club, finally finding his feet at Real Sociedad during the 2011/12 season.

As a result, they made the deal permanent and the rest is history.

4. He Was Suspended by Mexico for Six Months for Throwing a Party Alongside teammate Efrain Juarez, Vela was banned from playing for Mexico for six months after breaching four rules of his countries code of conduct.

The then 21-year-old was found guilty of throwing a party at the team's hotel in the aftermath of their 1-0 win over Colombia in a friendly. The national team's management, and relevant authorities, didn't take kindly to it and Vela paid the price.

5. His Brother Is a Professional Footballer Too The 35-year-old has spent almost his entire career in his homeland, with his only experience outside of Mexico being a nine-game loan spell with Minnesota United in 2015.

6. Vela Is Taking MLS by Storm Since joining Los Angeles FC at the start of last year, Vela has been a revelation in MLS. He is now up to 48 goals in 60 games since moving across the pond - with his 34 this season coming in just 31 games.

He  adding a second 21 minutes later.

He is also the highest scorer in the derby, having bagged four goals in the three games the sides have contested - one ahead of a certain Zlatan Ibrahimovic.