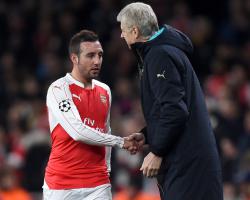 Wenger, who turns 67 at the end of October, is in the final season of his current Arsenal contract

Before the international break, Wenger said it is possible he could ''one day'' manage England if he had no club commitments - an offer the Football Association would reportedly like to pursue in the summer

Earlier this week, Arsenal chief executive Ivan Gazidis suggested the board and manager remained relaxed about the situation, with both parties ready to work towards a resolution when the time was right

Cazorla, though, maintains whatever Wenger's future plans may be, the Arsenal boss has not dropped any hints they would not include extending his stay at the Emirates Stadium

"The truth is we do not have that feeling in the dressing room," said Cazorla, in an interview with Spanish broadcaster Cope on its This is Football podcast

"It is in his hands and he is the one who has to make the decision, but today I would say that he may continue."

Cazorla, whom Wenger brought to the club from Malaga in August 2012, continued "Arsene is an icon at the club

"We were aware of that and I hope the club can take a step forward and Arsenal can be fighting for big things this season."

On his own future, Cazorla added he felt "happy" and "valued" at Arsenal, with reports suggesting the playmaker could be set for a return to Spain with Atletico Madrid

Arsenal have made a solid start to the new season, currently third in the Premier League table having recovered from a 4-3 home defeat by Liverpool on the opening weekend to produce an unbeaten run of nine matches in all competitions

The Gunners, though, needed a somewhat controversial stoppage-time winner from defender Laurent Koscielny to secure a 1-0 win at Burnley in their last game ahead of the international break

Cazorla, however, feels such moments can define a campaign

The 31-year-old said: "Many times we talked about what we have lacked to win the Premier League in recent seasons, because we have always had opportunities to fight for the title

"Last season, when teams like Manchester United, Chelsea or Manchester City were not doing well, we had a chance to win, but due to our inconsistency we didn't take it

Even with a controversial goal in the last minute it is okay because those games can give you the title.

"We cannot drop points in certain matches because at the end of the season those points could cost us the Premier League title."

Right-back Hector Bellerin, though, came off with a suspected ankle problem when playing for Spain Under-21's in the win over San Marino on Wednesday, so will be assessed