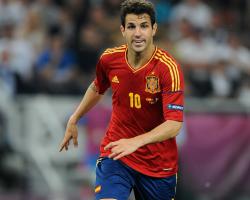 Fabregas was a big hit during his eight-year spell at Arsenal and was given the captain's armband in 2008 before securing a dream move back to Barcelona in 2011.

However, with Barca set for a period of rebuilding under new coach Luis Enrique following a rare barren season, Fabregas has been widely linked with a return to England this summer

Chelsea are said to be frontrunners for the 27-year-old but Cazorla, who is part of Spain's World Cup squad alongside Fabregas, hopes the midfielder ends up back at the Emirates.

He was quoted by the Spanish press: "I've read that he could go to Chelsea but I'd prefer him to come to Arsenal because he's a great player and they really love him there.

"I don't know what his future is, but I hope that he will be happy and enjoys the team wherever he is."

Cazorla, who joined Arsenal in 2012, also defended Fabregas' displays in the Primera Division, adding: "I don't think there's a big difference between Cesc's performances in the Premier League and La Liga

There's no difference in his numbers, he's adapted perfectly to both leagues."