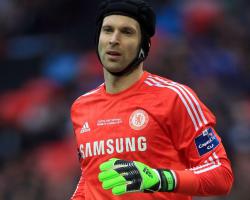 The 33-year-old has been one of the mainstays of the Roman Abramovich era at Stamford Bridge, winning nearly every club honour with the Blues along the way.

Having been a regular for 10 years, he found his playing time limited last season, losing his first-team spot to Thibaut Courtois and had been expected to move on this summer, with Arsenal leading the chase for a couple of months.

The Czech said: "I'm really excited about joining Arsenal Football Club and can't wait to join up for pre-season."