Legendary midfielder Cesc Fabregas has revealed his ultimate lineup of his former teammates, and it's an incredibly talented team.

The Spaniard has turned out for Arsenal, Barcelona and Chelsea during his storied career, and he also enjoyed a stunning amount of success with the Spanish national team.

After falling out of favour under Maurizio Sarri, Fabregas left Chelsea in January in search of regular game time and currently turns out for Ligue 1 side Monaco.

I didn’t know they’d ask me this so I did it very quickly. Only players I played with. I feel Puyol & Villa should be there.

What are your thoughts?

In a post on ​Twitter, ​Fabregas revealed his selection of 11 former teammates, beginning with Spanish goalkeeper Iker Casillas, who is widely regarded as one of the greatest of all time.

His dream defence is made up primarily of ​Barcelona stars, with ​Dani Alves, ​Gerard Pique and Jordi Alba all making their way into his lineup. They are joined by ​Chelsea icon John Terry, with whom Fabregas spent three years at Stamford Bridge between 2014 and 2017. 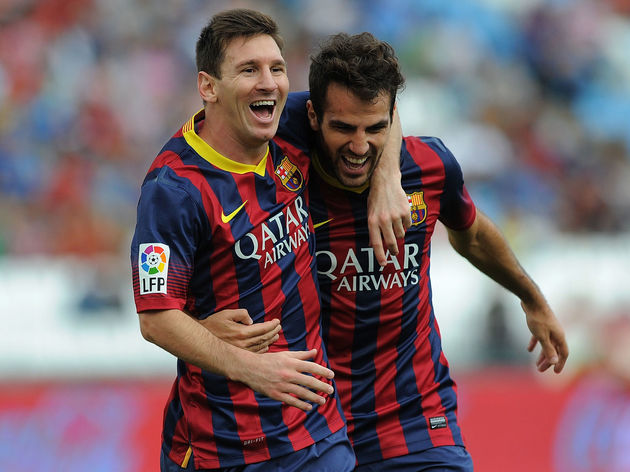 In attack, Fabregas has gone for Frenchman Thierry Henry, who lined up alongside Fabregas during his early days with Arsenal. Next to Henry is perhaps the most surprising pick, ​Atletico Madrid striker ​Diego Costa, who formed an incredibly effective partnership with the midfielder at Stamford Bridge.

The duo fired Chelsea to the ​Premier League title in 2015, with Fabregas creating countless opportunities for his fellow Spaniard. Six of his 19 assists came directly for Costa, in one of the finest individual seasons in league history. Fabregas also added that he wished he could find a place in his dream lineup for two of the finest players in Spanish history, Carles Puyol and David Villa.

However, having played for some of the finest club and national sides in history, Fabregas certainly had a tough challenge to find just 11 of his favourite teammates.