​Chelsea will be well aware what a win over Arsenal will mean for their Women’s Super League title hopes this season. What’s more, the two-time WSL champions will know that they have had the upper hand in recent games against the Gunners.

Arsenal, on the other hand, can make a statement of their own with victory against their close rivals, making this Sunday’s action at Meadow Park a real titanic clash.

Reigning champions Arsenal are three points clear of Manchester City at the top of the WSL table as things stand, with Chelsea a further point back in third place. A win for either side this weekend could therefore have major implications in the hunt for the trophy.

Chelsea, who remain the only unbeaten team in the WSL so far this season, also have a game in hand that could eventually even send them top in due course if they also win on Sunday.

Emma Hayes’ side beat Arsenal at home earlier this season when a late goal from defender Maria Thorisdottir competed a 2-1 comeback. The Gunners have actually lost more games against Chelsea than any other WSL side, including both of the last two.

A 5-0 win for Arsenal at Chelsea’s Kingsmeadow ground last season stands out as a freak result. But what is impressive is Chelsea’s consistency in away games at Arsenal – they are unbeaten in their last five trips there, with four wins and a draw to show for it. 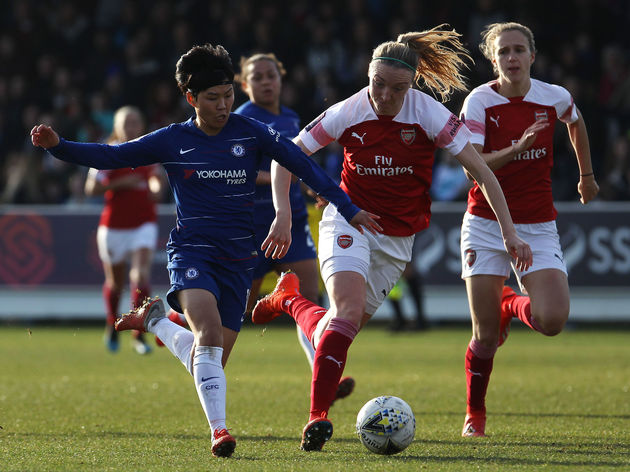 Both teams have attacking players in top form. Arsenal’s Vivianne Miedema and Jordan Nobbs have created 15 chances for one another this season, which is the most of any pair in the WSL this season. But that is just one more than the 14 by Chelsea’s Beth England and Guro Reiten.

Chelsea are also still waiting for winter signing Sam Kerr to find her feet and get off the mark. The Australian was recently named best female footballer in the world in The Guardian’s latest annual top 100, but has seen several chances go begging in her two appearances so far.