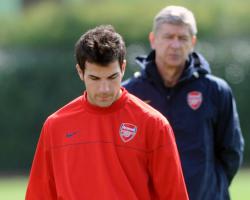 The 29-year-old made over 300 appearances for the Gunners, who travel to Stamford Bridge on Saturday seeking to end Chelsea's 10-match winning run at home.

Fabregas was made captain of Arsenal aged 21 and spent eight years under Wenger at Highbury and the Emirates Stadium.

He rejoined Barcelona in 2011 before returning to England in 2014, signing for Chelsea when Wenger declined to take up an option on his former skipper.

The Spain playmaker insisted there were only fond memories, not bad blood, despite some Arsenal supporters turning on him for his move to Chelsea.

There's something that will never change.

"There's many things said about me, about Arsenal.

"I don't really care what people think about me any more

It's just about what I feel towards them.

I was a young kid, 16 years old, playing for Barcelona.

"Arsene Wenger, especially, and Arsenal Football Club, gave me everything.

"Without them I would not be a World Cup winner, a European Championship winner

And I would not have experienced all of this that I'm doing in my life.

"I will always forever be grateful."

And Fabregas and Eden Hazard will be looking to consolidate Chelsea's place at the top of the table against Arsenal this weekend.

And Henry then asked Hazard to appraise the differences between Chelsea head coach Antonio Conte and Jose Mourinho, the former Chelsea boss now in charge of United.

"We do more with Conte

We know exactly what to do on the pitch, where I have to go, the defenders (know) where they have to go

We know exactly what to do.

"With Mourinho it was just he put the system (in place), but we didn't work a lot (on it)."

Mourinho might point to the fact that Chelsea's fixture schedule allows for more tactical work, due to the absence of European football.

However, Mourinho is culpable for that after a miserable title defence last season which resulted in his sacking for a second time.

Hazard, who has nine goals this season, seems to be enjoying playing without any defensive duties.

He added: "I just need to be ready for if we get the ball