Chelsea vs Arsenal: A Toxic Rivalry Ignited at the Turn of the Century

Even though neither consider one another their ‘main’ rivals, Arsenal have actually played Chelsea more times than their north London neighbours Tottenham Hotspur and encountered the Blues in the top flight as early as 1907, two years before they would first meet Spurs in Division One.

Henry King comes out of the tunnel in Arsenal's first clash against Chelsea, 1907/08. pic.twitter.com/O3mQCGNRAv

​Arsenal and Chelsea are the two biggest and most successful sides in the capital yet they only began to compete against each other for the biggest prizes since the late 1990s. And it was when a certain Russian billionaire took an economic interest in football in 2003 that the dynamic irreversibly shifted.

The first signs of a newfound tension between the clubs came in Roman Abramovich’s debut season as ​Chelsea owner, when the teams met in the Champions League quarter-final. Claudio Ranieri’s Blues knocked out an Arsenal side which would go the entire league season unbeaten.

The following summer Abramovich would appoint ‘a special one’ and it was the bitter, seemingly personal rivalry between José Mourinho and Arsène Wenger which truly ignited this derby.

When the pair first met in 2004 Martin Tyler described it as “a clash between two managers who, beneath very sophisticated surfaces, have the instincts of street-fighters.” Yet, other than their status as exotic foreigners, Mourinho and Wenger were two very different characters, with contrasting approaches to management.

The emphasis upon the opposition became Mourinho’s defining feature as a coach, especially nearer the start of his career whereas Wenger rarely mentioned anything about the opponents. The Frenchman was clearly associated with a footballing philosopher while Mourinho adapted his team to simply win.

Both methods would bring success and by the time Mourinho had arrived in west London, Wenger could already point to three ​Premier League titles, three FA Cups and singlehandedly revolutionising the English game.

Mourinho himself wasn’t short of a few trophies given his success with Porto but the tragedy of this rivalry is the fact that when the two first met, Wenger and Arsenal were on a downward trajectory while Chelsea were unquestionably looking skyward. In that first campaign Chelsea and Arsenal occupied the top two but there wasn’t ever really a nail-biting title race as Mourinho’s side romped to first place, 12 points clear of their London rivals.

In the 15 years since a suave, gel-haired Mourinho strolled into Stamford Bridge, Chelsea have won five titles compared to Arsenal's zero and finished ahead of the Gunners in the league 13 times. Yet, in the 15 seasons prior to 2004/05, Arsenal had claimed a higher finish on no less than 14 occasions and won four titles - a definitive turn in fortunes.

Despite these contrasting trajectories the pair have not struggled to forge a feud which has erred closer to toxic than simply competitive, with Mourinho calling Wenger a ‘voyeur’ and a ‘specialist in failure’.

Yet, the Frenchman is not entirely innocent either as he once bitterly replied to Mourinho’s barbs with a less than subtle retort of his own: “When you give success to stupid people, it makes them more stupid sometimes and not more intelligent”. The war of words even descended into a physical confrontation in 2014 when Wenger pushed Mourinho in the chest. However, the circumstances of that incident go some way to highlighting the one-sided nature of the head-to-head.

In Wenger’s 1000th game in charge of Arsenal, Mourinho guided Chelsea to a staggering 6-0 (he had also defeated the Frenchman in his 500th as Gunners manager) win. It was the 11th consecutive meeting between the two and the 11th time Mourinho had avoided defeat.

The pair met 15 times while in charge of Chelsea and Arsenal. Wenger prevailed just once, in their penultimate meeting at the 2015 Community Shield.

That was far from the first time these sides have directly contested silverware. The t 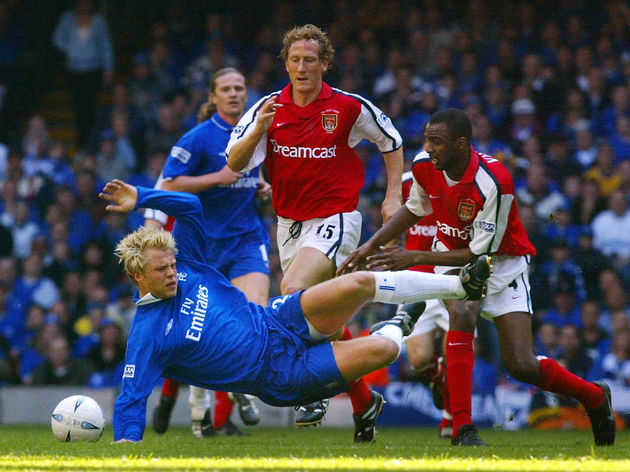 But their most recent showpiece encounter produced one of the more conclusive victories in the derby’s history as Maurizio Sarri’s Chelsea swept aside Unai Emery’s Arsenal 4-1 in the Europa League final. Thereby denying Arsenal a first triumph in the competition and a return to the ​Champions League.

This meant three years absence after 19 consecutive seasons with Europe’s elite and goes some way to show how Arsenal have declined since the mid-2000s. Chelsea won the title only three seasons ago but both sides look some way off the unprecedented relentlessness demonstrated by Manchester City and Liverpool over the last two seasons.

Nevertheless, while games between the pair may no longer decide titles, this modern derby, forged at the turn of the century, remains a fiercely contested and enthralling spectacle.