Over the last 30 years some of the greatest players to have graced these shores have worn the red or blue of Arsenal and Chelsea which has made the selection of this XI a painstaking process.

Nevertheless, here are the players who survived the cut and lit up London’s alternative derby… Čech became one of the greatest goalkeepers in the world during his 11 years with Chelsea. After winning every title possible for the Blues, Čech crossed the divide to join ​Arsenal in 2015 and despite the fact that his powers were clearly waning, the affable goalie managed to become a firm favourite in the north as well as the west of the capital.

His commitment to both clubs is evident from the helmet he wears in his second venture into competitive sport, ​ice hockey. Čech's protective headgear sports both the Arsenal and Chelsea badges as he tends goal for Guilford Phoenix. One of only five outfield players to have featured in every minute of a ​Premier League title-winning season, Ivanović was the picture of reliability during his trophy-laden spell, patrolling Chelsea’s right flank. 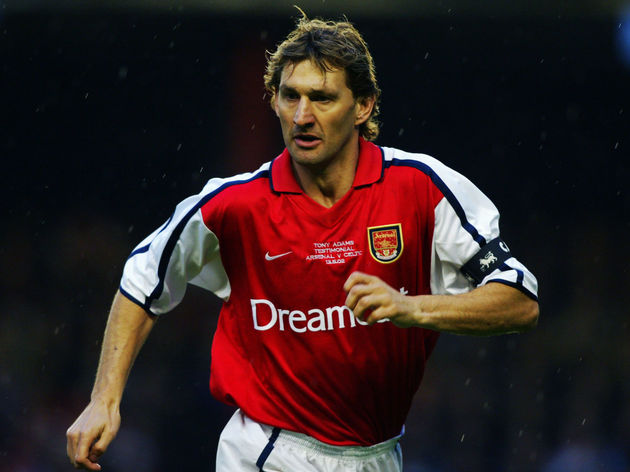 Tall, vocal, committed. Tony Adams was one of the greatest captains Arsenal have ever had. He bridged the gap between the old school culture of drinking and eating competitions (Steve Bould’s nine dinners could never be matched) and Arsène Wenger’s arrival and revolution of English football. Terry, who would become the top scoring defender in Premier League history with 41 goals, netted his first ever goal for ​Chelsea against Arsenal in 2001 – but future club captain would have to wait until 2004 to record his first win against the Gunners.

However, Terry would become the heart of the Chelsea side which would dominate the rivalry during Jose Mourinho’s reign, and he would avoid defeat in his final eight league games facing Arsenal, collecting numerous titles at their expense. Growing up an Arsenal fan, Ashley Cole’s protracted transfer to Chelsea would see him become the chief villain of the rivalry, at least in the eyes of those in red.

Patrick Vieira once said that he believed Cole would become the ‘next Tony Adams’ and during his time in north London, he developed into the world’s best left-back, forming an incredibly fruitful linkup with Robert Pires and Thierry Henry on Arsenal’s formidable left flank.

At Chelsea, his success would continue and when he wasn't ​firing air rifles at work experience students, Cole won eight major trophies in eight years in blue. The dominant figure of Patrick Vieira bursting from midfield, eating up the ground with his incredibly long strides, was one of the defining aspects of Arsène Wenger’s first decade at the club.

In Vieira’s nine years in north London the Frenchman won a trio of Premier League titles and FA Cups; going unbeaten against Chelsea in both competitions. Arsenal’s youngest ever player and goalscorer beguiled the north London faithful for seven years with his skill, technique and sharp edge.

After a disappointing spell back at Barcelona, Fàbregas was denied the chance to ​return to Arsenal and instead headed to José Mourinho’s Chelsea.

He proved the difference almost immediately, striking up a prolific partnership with Diego Costa on their way to the league title - a season in which he recorded a staggering 18 assists, more than he ever had in a single campaign at Arsenal. For a player infamous for his ability to score goals from midfield, Lampard oddly had a, relatively, poor personal record against the Gunners - scoring just three times in 22 league meetings as a Chelsea player.

However, the current Blues manager popped up with a crucial strike in the second leg of the Champions League quarter-final, equalising at Highbury before Wayne Bridge’s 87th minute winner knocked Arsenal’s ‘Invincibles’ out of the competition. The arrival of Bergkamp at Arsenal in 1995 had a truly transformative effect on countless aspects of the club: From players’ attitude in training, to the way he could pull the strings as one of the league’s most prominent deep-lying forwards to Ian Wright’s night-time attire.

Lovingly remembered as a sensationally gifted player, his athleticism can often go forgotten. At the age of 33, Bergkamp recorded Arsenal’s third-fastest 60m sprint time - admittedly behind Thierry Henry and Jermaine Pennant but ahead of the likes of Ashley Cole and Sylvain Wiltord. No player has scored more goals in this fixture than the man who has come to haunt Arsenal fans’ dreams, Didier Drogba.

In 15 games against the Gunners, for Chelsea, the Côte d’Ivoire international has netted a staggering 13 goals and only ended up on the losing side once.

Famously a player for the big occasion, Drogba coupled his tendency for scoring in finals with scoring against Arsenal by, you guessed it, netting twice against Arsène Wenger’s side in the 2007 League Cup final. Henry famously never lost a north London derby, but the same cannot be said for his encounters with the side from the west of the capital - losing four times when he faced Chelsea.

However, the Frenchman netted ten goals against the Blues including a brace against José Mourinho’s record-breaking defence of 2004/05. Henry’s two goals that day accounted for more than 13% of the total tally Chelsea conceded that year.