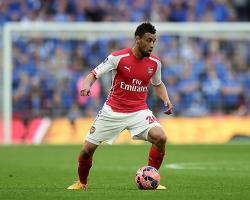 The Gunners tackle the leaders aiming to eat into their 10-point advantage at the top of the table following last weekend's 1-0 victory over third-placed Manchester United.

Coquelin was drafted back into the Arsenal squad from a loan spell at Charlton in December, since when the 23-year-old has gone on to cement his place in shielding the back four, and has been instrumental during a run of 21 victories from the last 25 matches.

The Frenchman, though, knows he will be up against one of the best defensive midfielders around when Serbian Matic aims to close out another triumph for Jose Mourinho's men.

"What he has done is unbelievable

At Chelsea he is one of the main men, so credit to him

He has had a great season and is a great player

It is always good to play against players like that," Coquelin said on Arsenal Player.

"It is an important position and Matic has shown how important he is - that is what I am trying to do as well for Arsenal.

"The fans want a good defensive midfielder - they know it is important for the team."

Arsenal will be out to beat Chelsea for the first time since October 2011, when Robin van Persie netted a hat-trick in a remarkable 5-3 victory at Stamford Bridge.

Wenger, though, has every confidence his side can again answer another stern examination.

"From a good run of form you get a good belief and we have a good solidarity," he said.

This season is the first time we have won away from home against Manchester City [in a while].

"So we have passed many tests and we have another on Sunday that we want to pass."