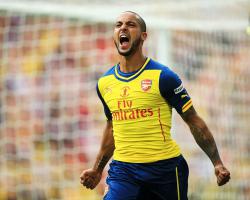 Nine years have passed since Arsenal signed the precocious teenager from Southampton and now, aged 26, he is approaching what should be his peak.

Walcott has shown flashes of brilliance over that period, yet accepts he needs to do that on a far more consistent basis for club and, in particular, country.

Arsene Wenger certainly seems confident that the forward will iron out that inconsistency, with the Arsenal manager having noticed an improvement in the player's finishing as he approaches his "golden age".

"I think this sort of age is where you push on, without a doubt," Walcott said, speaking ahead of England's friendly in Ireland

"Turning my Arsenal form into England is the next big step for me personally.

"There have been patches but it hasn't been at a consistent level and I know that in myself - I don't need any of you guys to tell me that.

"It is a gradual process but in these years now, if I want to be one of the greater players, obviously I need to perform for England and Arsenal on a consistent basis."

The recent signs are certainly positive, with Walcott's gradual recovery from a ruptured cruciate ligament accelerating markedly in recent weeks.

A hat-trick against West Brom in the final league game of the season was rewarded with a start in last weekend's FA Cup final - faith he rewarded by scoring the opening goal in what ended up a 4-0 win against Aston Villa.

The Wembley triumph was particularly sweet for Walcott considering his injury problems and the kind of display which makes him confident the best years lie ahead.

"I've reached 300 appearances for Arsenal - not just any club but a top club like Arsenal, which is a great achievement.

"You've seen patches of it and I just need to be a bit more consistent now."

Walcott admits the end of the season comes as a blessing and a curse given his current form, just like last year's serious knee injury.

The forward was clearly devastated to miss last summer's World Cup and a huge chunk of game time, but it did allow him to spend time with new-born son, Finley.

Walcott's 14-month-old is already impressing with the ball at his feet - proved by a video which led Wenger to jokingly ask who his agent was - and fatherhood has given the forward a new perspective on his career.

"It's made me think a lot more," he said

"Family is so important

It's something special when it happens

I'm speechless every time I see him, he's unbelievable.

"I'm going into games thinking a bit differently as well, as in 'I'm going to do it for you'

I've never had that before.

"Obviously I've always wanted to do it for the fans and the family, but when there's part of you there it's different

And you just don't want to let your little dude down."

Walcott spoke openly about Finley, even showing a slow-motion video to journalists of him playing football, but clammed up somewhat when it came to the subject of his own future.

The forward's contract at the Emirates Stadium expires at the end of next season and that has led, understandably, to mounting speculation about a possible exit.

"My club future at the moment is absolutely fine," Walcott said

"As you can see I've been playing, I've been very down to the point and wanting to play well for the club.

When it comes to the summer with the contract and all the situations, that's something I'll deal with after.

"I don't really want to discuss it because I think that's a distraction that will affect these next two games.

I'll just leave my agent to deal with that side."