After precautionary self-isolation of individuals at Leicester and Manchester City, as well as Chelsea closing their training ground on Thursday when someone ‘close’ to the squad showed symptoms, Arteta was the first confirmed case of COVID-19 at a Premier League club. 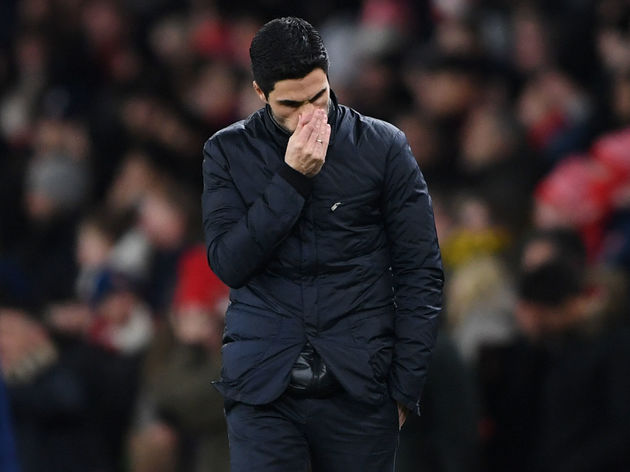 The Guardian explains that the Spaniard was tested after initially feeling unwell. His positive diagnosis is said to have been known at around 9pm on Thursday and Arsenal made a public statement a little over an hour later.

He and the playing squad and coaching staff will now serve an isolation period of 14 days, but The Guardian has also revealed that there may be up to 100 people in total that have to self-isolate as a result of coming into contact with Arteta in recent days.

The newspaper notes that, despite contracting the virus, Arteta himself is feeling positive and his primary concern is the time he will spend not being able to work.

Some Arsenal players had already been in self-isolation as a precaution after coming into contact with Olympiacos owner Evangelos Marinakis last month, but were not thought to have caught anything from the businessman, whose diagnosis was confirmed earlier this week.

Arsenal’s upcoming Premier League fixture against Brighton cannot go ahead because of isolation and there are concerns over how a two-week quarantine, during which time the players can do no more than individual gym work at home, will impact the squad’s fitness. The Premier League has an emergency meeting on Friday morning, despite confirming on Thursday night prior to Arteta’s diagnosis that games will go ahead as planned, to discuss whether fixtures generally should continue to be played.

The Premier League is the only major league in Europe not to have so far taken any action, with La Liga and Serie A both suspended, and Ligue 1 and the Bundesliga at least holding games behind closed doors. Football is on hold in the United States, Portugal, Netherlands and Ireland.