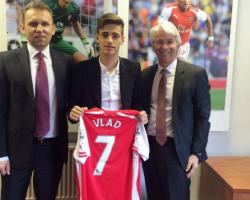 Romanian site ProSport state that the north London club have been monitoring Dragomir for around 18 months and have decided that time is right to bring the player from ACS Poli Timisoara to Arsenal's youth set up in London.

Arsenal's Chief Negotiator Dick Law was present at the contract signing, with Dragomir becoming the first ever Romanian to sign for the Gunners.

"I proposed to Arsenal a year ago and a half, during which they monitored closely

In my opinion, Vlad is one of the most talented players in Europe at the moment "

The 16-year-old Romanian U16 captain is set to move to London at the end of June where he'll be integrated into the clubs youth and reserve teams.

Arsenal have agreed a compensation package with Poli Timisoara for around 100,000 Euros.