​Manchester City, Arsenal and Tottenham Hotspur look set to compete for the signing of Rennes starlet Eduardo Camavinga, after scouts watched the 16-year-old star in a shock win over Paris Saint-Germain.

Clearly not starstruck by the nature of the opposition, Camavinga produced a magnificent display against PSG, and his assist for the winning goal - a stunning long pass for Romain Del Castillo - made him the youngest player in Ligue 1 history to ever create a goal. 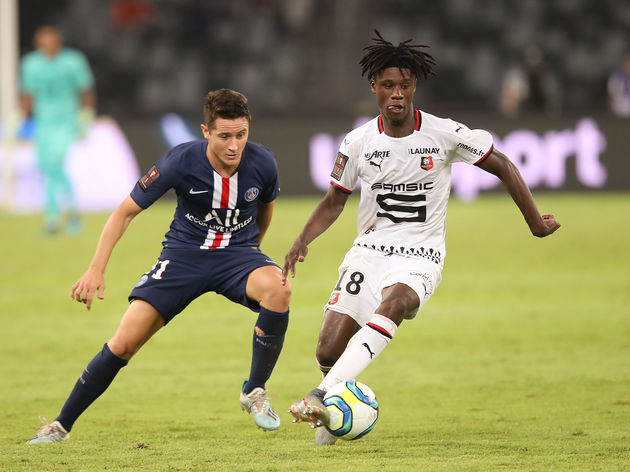 According to the ​Daily Mail, scouts from ​City, ​Arsenal and ​Spurs were all in the stands to watch the game at Roazhon Park, They all liked what they saw but, with interest in Camavinga from both ​Barcelona and ​Real Madrid, signing him is easier said than done.

Spurs are credited with the longest interest in the midfielder, having tried - and failed - to sign him last season after Camavinga made his senior debut in April.

He went on to make seven appearances last season, and has already added a further three since the start of the current campaign. It appears as though he has earned a permanent place in Rennes' starting lineup, although whether they will be able to hold onto him is a different question entirely.

He is under contract until the summer of 2022, so Rennes will not be in any rush to sell, but they may find themselves unable to resist a sizeable offer from one of the interested sides.

Primarily a defensive midfielder, Camavinga's power and technical ability has seen him draw comparisons to ​Manchester United star ​Paul Pogba. Coaches who have worked with him in the past have tipped him for a bright future with the French national team - assuming he manages to successfully apply for French nationality.

Against PSG, the Angola-born starlet, who moved to France when he was six, impressed with his passing and close control, and he will have undoubtedly attracted the attention of most of Europe's elite as a result.