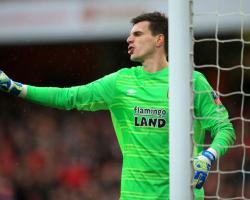 With the Gunners coming up against Barcelona in the Champions League on Tuesday, manager Arsene Wenger made nine changes while Steve Bruce went one further as his side showed 10 alterations as promotion back to the Barclays Premier League clearly remains Hull's top priority.

It was one of those changes, goalkeeper Eldin Jakupovic, who was the star man for the visitors as he kept Arsenal at bay with a number of superb saves to keep the score at 0-0 despite almost total dominance from the home side.

These two had met in the final two years ago, with Bruce's side surrendering a two-goal lead as Arsenal claimed their first silverware in a decade.

They also came up against one another in the third round last season as Arsenal went on to defend the trophy - but they will have to win a replay at the KC Stadium, sandwiched in between important fixtures at home and abroad - to stay in the hunt for a third successive FA Cup.

Danny Welbeck forced a first save out of Jakupovic as he connected with Theo Walcott's cross to head powerfully at the Switzerland international before Walcott himself curled a shot straight into the goalkeeper's gloves.

England international Welbeck was looking lively on his first start in 10 months and again tested Jakupovic with a driven effort at his near post, with Alex Iwobi then bending a shot just wide following the resulting corner.

Walcott's drilled shot on the half-hour mark was the next test for Jakupovic and another the former Lokomotiv Moscow man was equal to.

Hull's Harry Maguire was booked for diving in the Arsenal box before a lack of communication between goalkeeper David Ospina and the fit-again Laurent Koscielny almost saw the France defender glance a Shaun Maloney free-kick into his own goal but fortunately for the holders the ball drifted behind for a corner.

With Arsenal still pushing on heading towards the break, Hull caught them out on a counter-attack and Koscielny was booked for bringing down Adama Diomande as he looked to race clear of the Gunners' back-line.

The Gunners were getting closer and closer to the opening goal as Joel Campell drew the best save yet out of Jakupovic as he turned the Costa Rican's free-kick onto the post.

Remarkably, Jakupovic's heroics continued as he tipped a deflected Welbeck shot behind at full-stretch as Wenger prepared to introduce Olivier Giroud and Alexis Sanchez from the bench.

It was another substitute, Alex Oxlade-Chamberlain, who flashed a good chance wide as the game opened up in the closing stages with Jakupovic on hand to punch a stoppage-time Sachez free-kick behind meaning both sides will have to do it all again to find out who will reach the sixth round.