Arsenal travel to Goodison Park on Sunday to face Everton, hoping to pick up another three points in the race for the Champions League spots.

Arsenal are currently sat in fourth place with 63 points, one behind London rivals Tottenham and two more than Manchester United down in sixth.

They are level on points with Chelsea, but have a superior goal difference to the Blues, with 26 rather than 21. However, the Gunners also have a game in hand over their competition, and arguably have the best set of fixtures remaining.

With Lucas Torreira suspended and Laurent Koscielny a doubt for the game - along with the long-term injured Danny Welbeck, Rob Holding and Hector Bellerin - Unai Emery will likely deploy a back three to give the best possible balance to the team. Bernd Leno (GK) - The summer signing from Bayer Leverkusen has been an upgrade on the ​Petr Cech of recent years, impressing with his shot-stopping and distribution.

Ainsley Maitland-Niles (RWB) - A midfielder by trade, the ​Arsenal youth product has regularly had to fill in at fullback, and has featured heavily since Hector Bellerin's injury. Composed on the ball, the England Under-21 international has proven to be a solid tackler also.

Shkodran Mustafi (CB) - A World Cup winning defender, Mustafi has nonetheless been a disappointment since his arrival from Valencia in 2016. Overly aggressive and error-prone, the former ​Everton man gets in only because of injuries to Koscielny and ​Holding.

Sokratis (CB) - An experienced and tough centre half, Arsenal fans have warmed to the 2018 summer signing from ​Borussia Dortmund.

Nacho Monreal (CB) - A fantastic servant to Arsenal, the Spaniard has lost some of the attacking prowess he once possessed, and is more suited to a deeper role, where he can read the game and help to build up play from the back.

Sead Kolasinac (LWB) - Although questionable defensively, the Bosnian is a menace going forward, regularly providing crosses and cutbacks for the Arsenal forwards. 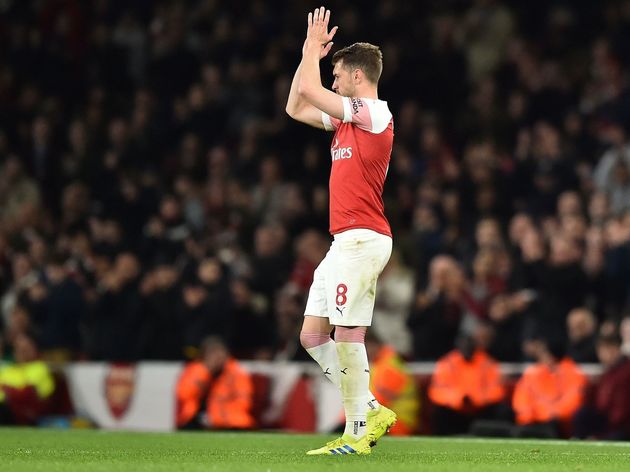 Aaron Ramsey (CM) - Soon to be a ​Juventus player, ​Ramsey was featuring only from the bench for much of this season. However, he's won the faith of Emery in recent months and remains as productive as ever, contributing towards 10 goals in 13 league starts from midfield.

Granit Xhaka (DM) - The Swiss international has been inconsistent for the Gunners since his arrival from Borussia Monchengladbach in 2016. However, at his best, he's the most capable Arsenal midfielder at progressing the ball from deep areas to forward positions.

Mesut Ozil (AM) - A divisive figure, ​Ozil has not particularly been at his best this season, assisting only twice in 16 league starts. Nevertheless, the German is more capable than ​Alex Iwobi or ​Henrikh Mhkitaryan at making consistently clever passes, and unlocking a stubborn defence. Alexandre Lacazette (ST) - Not quite as prolific as his strike partner, ​Lacazette has nonetheless proven to be a reliable source of goals, and is capable of clever passes and link up play.

Pierre-Emerick Aubameyang (ST) - Although not as well-rounded a footballer as Lacazette, ​Aubamenyang is a pure goal machine - since his arrival from Borussia Dortmund in January 2018, he's bagged 27 league goals in just 37 starts.