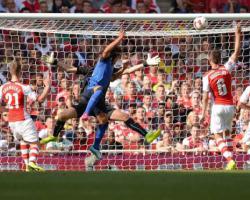 Following a big win on Saturday the Gunners, who had big-money summer recruit Alexis Sanchez starting for the first time, were favourites to collect the trophy but a 1-0 loss means Arsene Wenger's side once again missed out in front of their own fans.

Valencia won the competition having amassed nine points, one more than the Gunners who could not find the goal against Monaco to win their own tournament for the first time in four years.

Radamel Falcao scored the only goal of the game in the first half, although Arsenal will be aggrieved that they were not awarded a late penalty for a foul on substitute Chuba Akpom.

The game marked 15 years to the day since Gunners favourite Thierry Henry signed from Juventus, and a new prospective hero made his first start for the club as Wenger named Sachez in his starting line-up.

But, having won 5-1 against Benfica 24 hours earlier, Arsenal struggled against the Ligue 1 outfit and created little in the way of clear-cut chances with Sanchez rarely on the ball.

With Saturday's four-goal hero Yaya Sanogo and fellow goalscorer Joel Campbell rested from the squad, Wenger's side struggled to play at the same high tempo that had seen them blow Benfica away.

Falcao, starting a game for the first time since a serious knee injury in January, opened the scoring as he converted a free header from the edge of the six-yard box eight minutes before the break.

Sanchez was on the periphery for the opening 45 minutes and was moved into a central role when Olivier Giroud was replaced at the break by midfielder Alex Oxlade-Chamberlain.

Fellow new signings Mathieu Debuchy and Calum Chambers started in the Arsenal defence, with the latter replaced by Ignasi Miquel at half-time.

Former Barcelona man Sanchez was more involved immediately following his change in role as he fed Santi Cazorla inside the Monaco penalty area, with the Spaniard poking the ball through to Jack Wilshere, whose powerful effort was superbly turned away by Danijel Subasic.

Sanchez could only slash a shot wide after Nabil Dirar had dallied in possession inside his own box - the Chile international's last contribution before he was replaced with a little over 15 minutes remaining.

Akpom came on in his place and was brought down by Subasic as he burst into the box, only for referee Martin Atkinson to award a free-kick rather than a penalty, despite replays showing the foul was clearly inside the area.

Valencia finished the tournament on nine points after coming from behind to beat Benfica 3-1 in Sunday's early kick-off.

Derley opened the scoring early on for the beaten Europa League finalists after their Spanish opponents had gifted possession, but a 10-minute second-half salvo saw Valencia take victory.

Jose Luis Gaya levelled four minutes after the interval with Pablo Piatti and Andres Guardado giving Nuno Espirito Santo's side the win and overall success in the pre-season tournament.