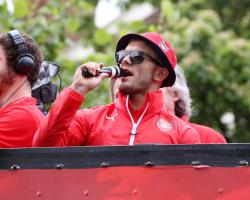 The 23-year-old, who came through the youth ranks at Arsenal, took to the microphone to mock the Gunners' north London rivals as the players celebrated on a stage outside the Emirates Stadium following Saturday's 4-0 final victory over Aston Villa

In similar scenes to 12 months ago, Wilshere then proceeded to lead the massed ranks of Arsenal fans in a chant which included expletives against Spurs, who again finished below their rivals in the Barclays Premier League table

Wilshere is set to join up with England later this week for the June internationals, and there is no suggestion at the moment that the Football Association is looking into the matter

Arsenal, meanwhile, issued a swift apology during their in-house media broadcast of the event and are understood to have spoken to Wilshere about his conduct.

However, the chair of the Arsenal Independent Supporters' Association Lois Langton believes Wilshere has been unfairly criticised.

"There has been far too much sanctimonious comment from certain sections of the media following Jack Wilshere's singalong at the Emirates yesterday," Langton told Press Association Sport.

It is hardly surprising that players are cautious about wearing their hearts on their sleeves if the reaction to Jack Wilshere is anything to go by.

"No doubt Arsenal will be obliged to remind him of his duties when representing the club in public, but Jack Wilshere showed yesterday that he totally understands what it is to be an Arsenal supporter.

"He has been with us since he was nine years of age and, for him, winning with Arsenal means celebrating with supporters.

"Jack simply reflected what is sung on the terraces up and down the country, week in and week out - the Spurs supporters have exactly the same songs for us."

Langton feels a sense of perspective needs to be taken surrounding the England midfielder.

She added: "Look at Jack's personal life and the wonderful charity work he does, especially with young people

He goes above and beyond what he needs to do, that should be the benchmark for measuring his role model status.

"In view of the real atrocities taking place around the world, it seems remarkable that Jack Wilshere leaning over a railing singing songs containing some expletives should generate such an outcry.

"Let's get back instead to focusing on Arsenal's superb team performance on Saturday to secure back-to-back FA Cup wins."

Tottenham Hotspur Supporters' Trust declined to make any comment on the matter when contacted by the Press Association on Monday morning.