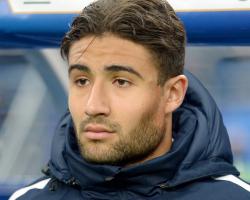 The 21-year-old striker, who scored 13 league goals for Les Gones last season, has been rewarded for his exploits at the Stade de Gerland with a year's extension.

Reports in France had suggested Fekir could have been tempted by a move to a top Barclays Premier League team - specifically Arsenal - had Lyon not qualified for the Champions League.

But a second-placed finish in 2014-15 helped persuade him to press on with Lyon.

Local boy Fekir, who made his senior debut for the Rhone-Alpes side in August 2013, told olweb.fr: "It was an easy decision

This club has captured my heart.

"I want to help us improve

There was no hesitation as I wanted to continue my adventure here."

Club president Jean-Michel Aulas added: "He is one of the club's - and France's - brightest prospects.

"His progress has been massive and he has shown he can handle himself well.

"I feel that Nabil is happy where he is and it's always nice to see that in a highly talented player.

"We are convinced this is an investment in the future."

A statement published on Lyon's official website on Wednesday revealed goalkeeper Anthony Lopes and versatile player Corentin Tolisso had also agreed to remain with the club for five more seasons.

Tolisso, 20, was a near ever-present in the Lyon midfield last term

He said: "I'm very happy to have extended my deal

It's a great reassurance for me and my family.

"We have the chance to prepare well now and get the new season off to a great start."

Portuguese keeper Lopes, a regular fixture between the sticks for the last two years, added: "My plan was always to extend my deal with OL.

The truth was quite different."