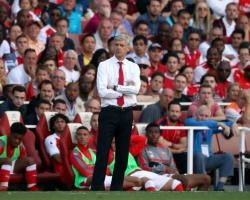 The Gunners boss pointed to the exertions of his players at Euro 2016 as a key factor, with France internationals Olivier Giroud and Laurent Koscielny not involved having reached the final with France, Mesut Ozil was also rested following Germany's run to the semi-finals.

But others were not so as cautious and here, football.co.uk looks at those players who did play some part in the opening weekend of the season despite prolonged runs at the Euro 2016.

While Ozil was deemed not fit enough to feature against Liverpool, Wenger opted to play Ramsey from the start.

He was forced off in Sunday's game with a hamstring injury.

At 33, he is older than Ozil, Koscielny and Giroud but he was still selected by Pep Guardiola for his first game as City boss

Belgium's so-called 'Golden Generation' may have only reached the quarter-finals before falling to Wales, but Spurs defender Alderweireld played every minute of their tournament.

He returned to White Hart Lane and, alongside compatriot Jan Vertonghen who was injured for the Euros, played the whole 90 minutes in Saturday's 1-1 draw at Everton.

Another Belgian who played for all of the Red Devils' Euro 2016 campaign - totalling 450 minutes of game time during the competition.

However, like Sagna, De Bruyne played for the entirety of City's win on Saturday while Giroud was a mere spectator.

The Southampton full-back may have not kicked a ball for Portugal as they squeaked through their group with three draws but he came into his own during the knock-out stages.

Soares was an ever-present from that point on, including two matches which went through extra-time and one that ended in a penalty shoot-out, as Portugal were crowned European champions

The 24-year-old then played 79 minutes of Saints' 1-1 draw at home to Watford on Saturday.