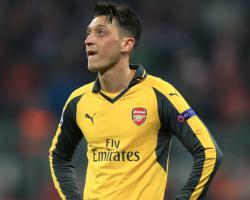 The German champions completed a 5-1 rout of the Gunners, all but assuring themselves a spot in the quarter-finals despite the fact the second leg is still to be played - in London on March 7.

Here, we address the main questions that were being asked after Arsenal's Bavarian nightmare.

What went wrong in Munich?

At half-time, the mood among the 3,000-strong travelling fans at the stadium would have been relatively high

But none of their big players really put in a show

Mesut Ozil again toiled, Granit Xhaka was overrun in midfield and the defence suffered massively from Laurent Koscielny's departure through injury on 49 minutes, shipping three goals within 14 minutes of their captain's departure

Does the result spell the end for Wenger?

Wenger's position has increasingly split the Arsenal fan-base, with some wanting to remain loyal to a man who has served them as manager for more than 20 years, and others calling for change

Tellingly, a number of Wenger's former players were all left stunned by the abject nature of the performance at the Allianz Arena, with the likes of Martin Keown and Lee Dixon joining Ian Wright in questioning whether Wenger should continue

What's next for the Gunners?

Having lost two of their three Premier League games leading up to the trip to Germany, Arsenal's only genuine hope for a trophy now appears to be the FA Cup

Wenger, the joint-most successful manager in the competition's storied history with six winners' medals, would have likely rotated heavily for the tie but he may no longer be afforded the luxury of doing so

But Arsenal are a good side, right?

On their day, the Gunners can fire down the very best, as evidenced when they beat Chelsea 3-0 earlier in the season

The trouble is, as a collective, the players rarely all enjoy their best days together and a number of their big names can all too often be on the periphery of a match

Ozil has been guilty of this, more so in recent weeks, while no-one in Arsenal yellow can claim to have had a good outing in Munich as they were clinically put to the sword

Who will stand up and be counted?

Koscielny is as close as he has, while Petr Cech's experience can help but he was left on the bench in Germany as Wenger opted to stick with David Ospina between the posts

ITV Sport pundit and former Manchester United skipper Roy Keane lambasted the fact Kieran Gibbs was wearing the captain's armband at the end of Wednesday's game, further highlighting that Wenger is struggling for trusted generals in the mould of Tony Adams or Patrick Vieira