Five talking points ahead of the FA Cup fourth round 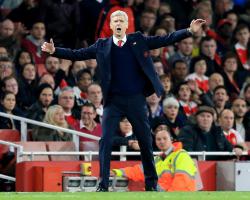 With big-name bosses under pressure and lower-league sides seeking cup runs to stave off bankruptcy, the stakes could hardly be higher.

Here, Press Association Sport looks at some of the talking points up and down the country:

WHERE ARE THE MINNOWS?

On Sunday, Carlisle, the lowest-ranked side still in the competition, meet Everton less than four weeks after their Brunton Park ground was submerged by floods

WHO HAS THE MOST TO LOSE?

After last week's crushingly disappointing Premier League loss to Chelsea, a slip against Sean Dyche's side would highlight the Gunners' inconsistency and shatter their hopes of becoming the first team since Blackburn in the 1880s to win three in a row

Chelsea, too, will find themselves wishing for a nightmare season to end as soon as possible if they suffer further embarrassment at the hands of MK Dons

Meanwhile for Aston Villa, a loss to Manchester City will leave them with a one-track mind on imminent relegation.

CAN THE CUP SAVE BOLTON?

Nowhere are the FA Cup stakes higher than at the Macron Stadium, where an extended run for Bolton could ensure their very survival

The stricken Trotters need to find ÃÂ£2.2million to pay HM Revenue and Customs, and last week narrowly avoided a winding-up order in the High Court

In the circumstances, the ÃÂ£90,000 at stake for reaching the last 16 is not to be sniffed at - while the prospect of landing a lucrative fifth-round draw, or even going further in the competition, could ease the club's burden considerably

Neil Lennon will certainly not be concentrating on the league.

CAN CITY WIN THE QUADRUPLE?

The long-term loss of Kevin De Bruyne will hit them hard, though, and despite their undoubted strength in depth there can be few convinced enough to wager on a clean sweep

Saturday's trip to Aston Villa looks easier on paper than it probably will be in practice, and there is a feeling with City - and Pellegrini in particular - that he remains one game away from disaster: or to put it another way, replacement by Pep Guardiola.

CAN POMPEY PULL OFF AN UPSET?

In 2008, Portsmouth won the FA Cup while Bournemouth were in administration and relegated to League Two

The roles have been spectacularly reversed ahead of Saturday's south-coast derby, which pits Eddie Howe's men very much as the big boys

In the short term, Pompey will be up for the challenge against a Cherries side who must surely have their minds set on top-flight survival

Fratton Park could bear witness to the upset of the round.