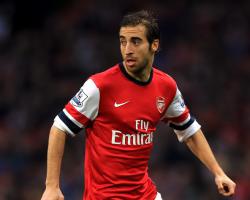 Few would have foreseen the drought that has followed the FA Cup final penalty shoot-out victory over Manchester United in May 2005.

While the second half of the Frenchman's stint in charge has been less fruitful than the first nine years, Arsenal's fortunes finally look to be on the up.

They are just a point behind Premier League leaders Chelsea with 12 matches remaining, and set up an FA Cup quarter-final with Everton after overcoming Liverpool 2-1 on Sunday with a performance that led Flamini to liken the current playing pool to the victorious side of 2005.

"What I will say about this season is that I see a great commitment, I see everyone working very hard on the pitch and helping each other," said the midfielder, who played for the club between 2004 and 2008, before returning last summer for a second spell.

"I think it is what we had when I was here and we won the FA Cup because against Liverpool it was a difficult game, from the first to the last minute everyone worked very hard, even the players playing up front.

"We asked them to defend and to help the team and they did it very well, which is very important for us

It was important to show some character on the pitch, some solidarity."

Not only are Arsenal fighting for success on the domestic front, but they also remain in the hunt for continental glory.

Having navigated their way through a tough Champions League group, the north Londoners now face the unenviable task of overcoming reigning champions Bayern Munich in the last 16.

The Bundesliga giants eliminated the Gunners at the same stage last term, but midfielder Flamini believes this season they can secure a shock and progress.

"We know it won't be an easy game because Bayern are a very strong team, but we are Arsenal, we have big ambitions," the Frenchman said ahead of Wednesday's first leg at the Emirates Stadium.

"If we want to qualify, we have to get a good result against Bayern.

"This year, Arsenal have a lot of ambition and are fighting for the league title

We have qualified in the FA Cup and we will do everything to qualify in the Champions League.

Today, we will start thinking about Bayern."

Liverpool have no such European concerns and, with just four points separating them and leaders Chelsea, the FA Cup exit means they can focus on maintaining their late title bid.

Brendan Rodgers and his players were left feeling hard done by after the defeat to Arsenal, having dominated large chunks of the match and been on the wrong end of decisions by referee Howard Webb that might have gone their way on another day.

Steven Gerrard spoke of that underlying frustration after the 2-1 defeat, but is sure the result will not derail their season.

"The least we deserved was a replay

Going out of the cup is a blow but the effort, the attitude and the character was excellent.

"We created enough chances and really took the game to Arsenal in the second half, but big moments went against us.

"There is nothing to be down about

Sometimes you just don't get what you deserve from games and this was an example of that.

"We have to move on, dust ourselves off and go again against Swansea next Sunday."