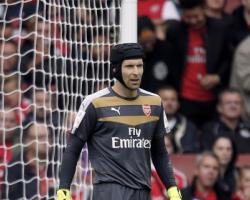 The 33-year-old goalkeeper ended a long association with Chelsea to move across London to the Emirates Stadium earlier in the summer.

Having lost his position as first-choice stopper to Thibaut Courtois, Cech was allowed to leave Stamford Bridge even though Mourinho was keen to keep hold of the Czech Republic international.

He is now likely to start at Wembley on Sunday when his new club Arsenal meet Mourinho's Premier League champions in the Community Shield.

The traditional curtain-raiser will give Arsene Wenger a chance to measure his current Arsenal side against the league's yard-stick and Flamini feels the acquisition of Cech is something the club must make use of.

"I was surprised by Mourinho because he really doesn't do that," Flamini was quoted as saying in several national newspapers.

"He (Mourinho) is a competitor and usually doesn't like to sell any players to his rivals, but it's a good favour for us and now we have to take advantage.

"It's a top signing

That's why we have been lucky on this one."

Having added the attacking talents of Mesut Ozil, Alexis Sanchez and Danny Welbeck in recent summers, Wenger has now strengthened at the other end of the pitch - and France international Flamini reckons the advantages of having Cech on board stretch beyond his goalkeeping abilities.

Not only for his quality but also for his character," added Flamini.

"When you play at the top level, the leaders on the pitch make the difference.

So, for us, Petr Cech is a top signing.