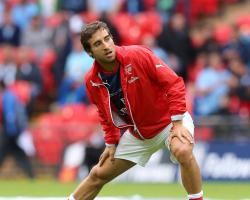 The Gunners added the Community Shield to their FA Cup success by beating a disjointed Manchester City side 3-0 at Wembley on Sunday.

The challenges which lie ahead over the next nine months will of course prove significantly tougher than those offered by Manuel Pellegrini's team, who had Willy Caballero in goal ahead of England's Joe Hart, several other regulars missing after World Cup duty and summer signings Bacary Sagna and Frank Lampard watching on from the stands.

"We have signed a few really good players, and that is excellent for us, because we have added a lot of quality to the team - we were already strong last season, but now we have added even more," Flamini said.

"Last season was good for us, even though we did collapse (in the league) over a couple of months.

"Now we are ready, with a strong team that has a lot of quality to be able to fight to the end."

Flamini added: "Of course this (win over Manchester City) will be good for the confidence to start the season, but we have to be focused because the season will be a long one, as you say here in England we must not forget that it is a marathon and not a sprint, so we have to make sure that we keep going until the end.

"But to win another title after the FA Cup is obviously very positive for us and shows that we are going in the right way.

"We have shown that we are very strong, now we have to be ready for the next game."

Arsenal host Crystal Palace on Saturday evening, before heading to Istanbul the following week for the first leg of what is a crunch Champions League play-off against Besiktas.

Wenger is keen to bring in another defender after allowing captain Thomas Vermaelen to join Barcelona, with Olympiacos' Kostas Manolas a reported target

Chambers, signed from Southampton for Â£16m, has impressed in his pre-season appearances.

The 19-year-old is determined to continue his progress.

Speaking to Arsenal Player, Chambers said: "It has been quite a whirlwind of a few weeks

I am taking every day as it comes, just concentrating on what I am doing next.

I just want to play the best I can and show everyone what I can do."

Arsenal's German World Cup winning trio are now back at the club's Hertfordshire base, with Lukas Podolski tweeting a smiling photo of himself, Per Mertesacker and Mesut Ozil all in their training kit.