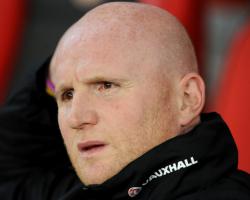 Hartson played under Wenger at Arsenal in the mid-1990s and he admits he was a big fan of the Frenchman, who has led the north London outfit to three league titles and six FA Cups during his 21-year reign

However, the ex-Wales striker now feels changes are needed at the Emirates after yet another humbling defeat

Monday's 3-0 loss at relegation-battling Palace was Arsenal's fourth successive away loss in the Premier League and left them sixth in the standings, seven points off the top four

Hartson told BBC Radio Five Live: " I worked under Arsene Wenger and I've always sort of been in the camp of 'Arsene Wenger's great, he's done fantastic, the Champions League qualifications, the money that he brings into the club...', but I just think now it's time for him to go

"It hurts me to say that because I like Arsene Wenger.

"(But) last night you would call that performance inept

There was a lack of leadership, lack of togetherness

The players are playing as individuals, they don't look like a team

There's a lack of fight and that's four (away) losses on the trot for Arsenal, that's the first time in 20-odd years that's happened to Arsene Wenger."

Arsenal's eighth league defeat of the season was another major blow to their hopes of qualifying for next season's Champions League, while their chances of winning a first Premier League title since 2004 realistically ended some time go.

Hartson doubts this current squad had the quality to compete for top spot in any case.

He said: "W hy aren't they challenging at the very top? I t's because I don't think the players are good enough

"I think there's a huge expectancy on Arsenal to be challenging but when you look at some of the players who are taking the field for them, I just don't think they're up to it

"T he expectation of some of these players is through the roof, and it shouldn't be because they aren't up to it

And they fact they went out of the Champions League 10-2 to Bayern Munich, that just goes to show the quality of the player that Arsenal are putting onto the field."

However, he warned Gunners fans they can forget about seeing the likes of sought-after Atletico Madrid striker Antoine Griezmann joining unless the club loosen the purse strings

He said: "You look at Griezmann this summer, he's available but you know he's only going to go to Chelsea, Manchester United or Manchester City because he'll probably cost around the ÃÂ£80million mark and he'll go on to over ÃÂ£200,000 (a week) wages

They don't even entertain that

"They don't go in for the top world-class players that become available, so I don't know where the Arsenal fans really think that the club should be

I don't think they should be challenging because they're not good enough to challenge."

"This is a manager who has managed the invincibles, and now he's managing the invisibles," said Sutton, referring to the nickname of Wenger's Arsenal side that went the entire 2003/04 Premier League season unbeaten.

"He's not getting the best out of the players, he has to go

Could someone else go in and do a better job? Absolutely," Sutton told Five Live.