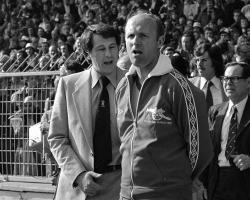 Howe won 23 caps for England and was in the backroom staff of managers Ron Greenwood, Sir Bobby Robson and Terry Venables

He is also remembered for managing both the Gunners and the Baggies, as well as QPR and Turkish giants Galatasaray

Football Association chairman Greg Dyke said: "It is terribly sad news and our thoughts are with Don's family at this time."

Howe was part of the Three Lions set-up for their two most successful tournaments in recent history, working with both Robson and Venables as they reached the semi-finals of the 1990 World Cup and the 1996 European Championship.

Dyke added: " He is widely regarded as being in the vanguard of coaching in England and I know that his loss will be keenly felt amongst the coaching fraternity in particular and not least by Roy Hodgson, who was close to Don

"He was a fine player - named as one of West Bromwich Albion's finest - and, of course, he went on to play an integral part in Arsenal's history as a coach and later as manager.

"For his country, he not only appeared in a World Cup but he was instrumental in both Sir Bobby Robson's management team for Italia '90 and Euro '96 where he assisted Terry Venables.

"Even in his latter years I understand he continued to pass on his knowledge and advice to aspiring young coaches.

"It is a great loss for English football, especially following on so soon after the sad passing of Jimmy Hill."

Howe was involved with Arsenal for five decades, joining them as a player in 1964 and going on to be coach, assistant manager, caretaker manager and eventually manager in 1984.

He returned as youth team coach at the Gunners in 1997 before retiring in 2003.

Gunners chairman Sir Chips Keswick said: "We were aware Don had been enduring a long battle with illness but it was still a shock to learn the news about someone who was loved by so many people at the club, and who had such a remarkable influence as a player, coach and manager here

He was the very best at what he did - and he did it with us, at Arsenal, for decade after decade.

"He will be greatly missed by everyone who knew him and his name will live on in the history books as one of the most influential footballing figures in the history of the club."

"Local lad Howe made 379 appearances for the club, scoring 19 times, during a 14-year spell at The Hawthorns.

"In 2004, he was named as one of West Bromwich Albion's 16 greatest players, in a poll organised as part of the club's 125th anniversary celebrations."