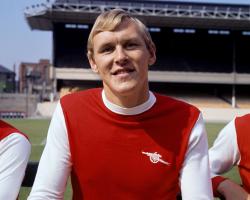 The Wales defender played for Swansea and Northampton before joining Arsenal in 1969 and spent more than three years in north London.

Roberts featured 18 times in Arsenal's historic 1970-71 campaign when the Gunners became only the second team in the modern era to complete the league and FA Cup double.

In all, Roberts made 81 appearances for Arsenal before joining Division One rivals Birmingham in 1972.

Abercynon-born Roberts won 22 international caps and was part of the Wales squad which reached the quarter-finals of the 1976 European Championship.

"Everyone at Arsenal Football Club was saddened to hear of the death of John Roberts," said a statement on the official club website.

"The thoughts of everyone at Arsenal are with John's family and friends."