Francis Coquelin returns to training ahead of Olympiacos clash 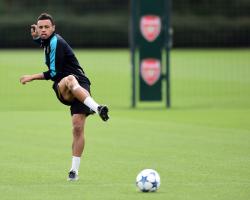 Arsenal will be without Mathieu Flamini and Mikel Arteta who both got injures against Leicester City on Saturday in the game which the Gunners won 5-2 .

Arsene Wenger said: "Coquelin could be available for Tuesday - he is the only one that could come back in.

"We lost Mathieu Flamini - it's his hamstring - but Gabriel is not suspended."

"He has a little chance for Tuesday, and a bigger chance for Manchester United

It is very difficult to be definite."

On Wilshere, Welbeck and Rosicky:

"They are all doing well

"It was very successful and touch wood hopefully all goes well now.