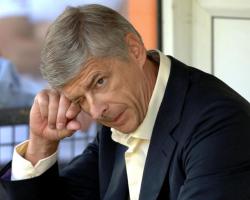 Wenger's position is under intense scrutiny and the Frenchman stated in the wake of Wednesday's 5-1 Champions League rout by Bayern Munich that he will make a decision on his future in March or April.

His contract expires at the end of the season and McLintock, who captained Arsenal during their double winning season of 1970-71, believes he must go.

"I think the decision is totally in his hands because he runs the show completely," McLintock told BBC Radio 5 Live's Sportsweek.

"He's weighing it up at the moment and I think it would be better if he did leave.

But I can see it turning a little bit nasty

We might struggle to finish in the top four this year.

"If that's the case then Arsene would be very disappointed and might say enough is enough."

McLintock is unconvinced by the quality of Wenger's recent signings.

"He's bought four or five players over the last year or so - Shkodran Mustafi, Gabriel Paulista, Granit Xhaka, Calum Chambers - and while they're decent players they're not the sort of players Arsenal should buy if they want to challenge for the European Cup," he said.