​Like a diamond in the rough, an 18-year-old Brazilian forward looks a cut above the rest of his teammates at Arsenal.

A £6m signing from South America, the youngster is one of few (very few) bright notes to take from what has been a season to forget for a club falling by the wayside in the Premier League.

Brought in as a prospect, a Europa League and domestic cup player, a future star - he's grabbed the top flight by the horns and made the league his new stomping ground. Gabriel Martinelli really is one of the continent's most exciting teenagers.

Breaking into the first-team fold has been a direct result of hard work, grit and determination. However, Mikel Arteta made it abundantly clear that he wants to incorporate ​Alexandre Lacazette and ​Pierre-Emerick Aubameyang in the side with his selections, often seeing the Gabon international switch to the left of the attack in order to bring as much firepower he can into his front line.

The only issue is, that's where Martinelli plays.

Hmm, how will this work?

When Aubameyang received his marching orders for a wild lunge on Max Meyer in the draw against Crystal Palace, the immediate concern was how Arsenal would fare without their top scorer. When the dust settled on those fears, the answer was clear: Martinelli.

While the two league games that followed only brought with them two points, who stepped up to score twice? That man Martinelli, of course. Showing predatory instinct for his goal against Sheffield United, and supreme levels of composure for his strike at Stamford Bridge, there was no doubting that this teenager is the real deal - already.

So now Aubameyang has served this three-match suspension, how are ​Arsenal going to line up for the rest of the season? Who needs to make way? One thing is clear, Martinelli has to play.

One player who seems safe in all of this is Nicolas

The Ivorian has shown glimpses of what he can do but is still some way off justifying a club-record transfer fee of £72m. Three goals and three assists in 21 ​Premier League outings is hardly the level expected when he joined in the summer, but he's still learning the league and patience is needed - even if patience can only last so long. 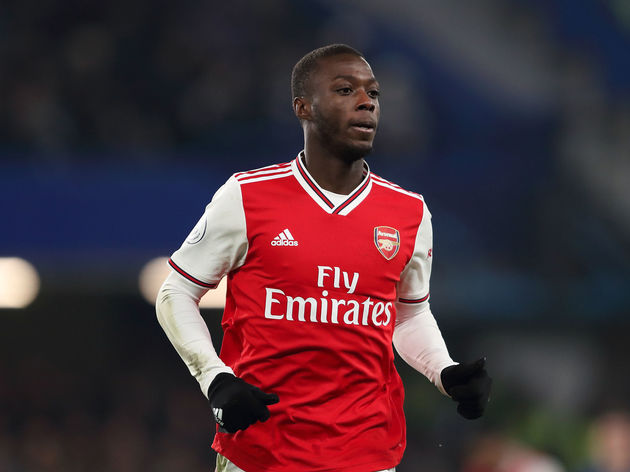 Thing is, he's a right winger. Dropping him and playing Aubameyang wide right is something that Freddie Ljungberg tried in his short stint in charge, but it didn't work, like, at all.

In that sense he's safe.

Sure, Martinelli could be shifted out to the other flank, but there is a huge risk in playing such a young player out of position when he's still very much in the development phase, even if he'd grab the opportunity without hesitation and put a shift in regardless. Yet, Lacazette is adored by supporters for his full-throttle style of play. He chases every ball down, wears his heart on his sleeve, and offers key link-up play with the midfield when he regularly drops deep. He has to at the moment, as ​​Mesut Özil

Unfortunately for him, leaving Martinelli out of the side now would be a substantial risk. He's in the form of his (short) life, playing with real energy and purpose but, most crucially, scoring goals.

His defensive work rate is not the same, something Lacazette offers in abundance. But, as they say, 'play your best players in their best positions'. At present, Martinelli is one of Arsenal's best players.

Time to get back to work in Burnley...

It will be interesting to see how Arteta lines up his side with all his forward players fit. He may indeed go with experience and seniority and leave Martinelli on the bench. He shouldn't though, the kid's on fire and there is no point extinguishing that against a side who struggle against 'big six' opposition.

Eyebrows will be raised and questions asked no matter who plays or doesn't play. That's the nature of being a head coach, making big selection decisions that will never appease everyone.

​That said, you've got to play Martinelli. You just do. He's warranted it for his professionalism and endeavour alone. He's a talent who is flourishing in the spotlight. Ensure that continues.