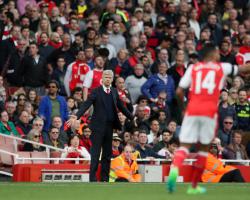 Clichy, who left the Emirates Stadium for Manchester City in 2011, was part of Pep Guardiola's side that drew 2-2 against Arsenal on Sunday.

Arsenal would find another equaliser for their under-fire boss as Shkodran Mustafi headed home to earn the hosts a share of the spoils.

Another pre-match protest against Wenger was held by a group of supporters calling for the 67-year-old to leave.

Wenger is yet to announce whether he will sign a new deal at the club, with his current contract expiring at the end of the season.

Arsenal are languishing down in sixth in the Premier League, sitting seven points adrift of fourth-placed City, having won only three of their last 10 games - two of which were FA Cup victories over non-league opposition.

They were also humiliated in the Champions League as Bayern Munich knocked them out with an aggregate scoreline of 10-2.

But Clichy, who played a peripheral role in Arsenal's 'Invincible' unbeaten season the last time they won the title in 2004, reckons Wenger should stay at the club he has managed for over 20 years.

If the club is spending more money and they have the players they need, then perhaps Wenger is the perfect man.

"If you take him off and you bring someone else with the same structure, would he be better? Would he do better? I'm not sure.

"I don't think many managers could have done what he has in the last 10 years.

"You always want something new when you are used to something and what you get is probably most of the time not better than what you have so you have to be careful what you wish for."

Clichy also said that protests aimed at Wenger's removal are part and parcel of the game, even if he does not agree with them.

"Of course, I was here before and I really hope everything can be sorted," he added.

"It is hard, yes, because the manager does not really deserve what he is getting.

"I can understand because football is free for everybody to have opinions so you cannot stop that and you cannot only think about the past because it is also about the present."

On the morning of the game, Arsenal chief executive Ivan Gazidis spoke at a pre-arranged fans' forum where he admitted the results over the last six weeks are a "catalyst for change".

He was not speaking specifically about Wenger but rather on a more general basis, although speculation continues over the future of the manager.

Despite the constant and differing reports, Mustafi insists the players are not talking about the situation and are more interested in addressing their poor form.

"They're talking a lot about the manager outside the club, but in the changing room it's not a discussion," he told arsenal.com

"He's the manager, we're the players and we are in every day to work on trying to win games

That's all we have in our hands, everything else is something people like to talk about.

We are only focused on trying to give everything on the pitch.

"We've been going down in a lot of games but we did well to come back and I think that shows how strong we are."

Arsenal welcome West Ham to north London on Wednesday night for a London derby as they look to get back to winning ways in the league, while City will be across the capital as they visit leaders Chelsea.