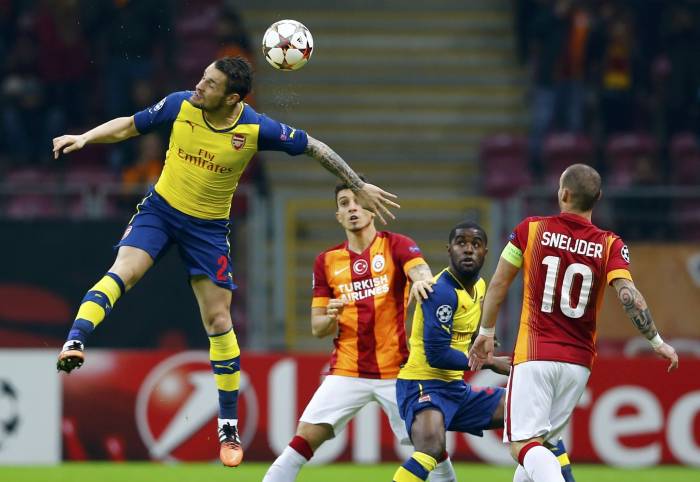 Barely had the game begun than Aaron Ramsey dribbled unopposed down the middle, fed the ball to Podolski, who put the laces through the ball and ripped an early thunderbolt past the keeper.

Not long after the Gunners made it two, when the Ox surged through the middle, tipped a pass to Ramsey, who placed it perfectly past the keeper into the far corner.

Podolski had two good chances to add to the lead, his first glancing off the crossbar, the second producing a good save.

Arsenal added their third a little later, this time Ramsey hit a half volley, off a corner kick clearance, into the top corner, a wonder goal of the highest order.

In the second half Arsenal removed both Ramsey and Flamini and were content to soak up some pressure and look for chances to counterattack.

Galatasaray produced little that worried Szczesny, until a late free-kick, which Wesley Sneider slammed into the top corner.

Arsenal scored their fourth in extra-time, Podolski glided through the defence to score with his right foot past the keeper. It punctuated a dominant display by the Gunners.

Szczesny  6.  First game back for Wojciech. Almost all of his saves were easy, only one was of moderate difficulty. Could he have been faulted for giving Sneider too big of a target to shoot at? Possibly.

Debuchy 7.  Quite an amazing performance when you consider that he just returned to training this past week. He was solid, for the most part, but he was exhausted when he left the field.

Chambers 7.  A better display than last weekend. He missed a golden chance to score, heading over the top when Ramsey found him alone.

Mertesacker 7.  Repelled most of the Galatasaray. His handball led to the freekick which Galatasaray converted.

Bellerin 6.  Had a busy night defending the left flank. Gave the ball away a number of times and tried to force things, usually with success. If passing had been sharper, through balls may have found him sneaking in on goal. A better game than at Stoke.

Flamini  6.  Decent first half, although he picked up a yellow card as usual.

Oxlade-Chamberlain 8.  Played in the more central midfield role. His pace and runs up the middle were a constant threat to the Turks. He assisted on Ramsey’s first goal, his speed a big factor. Faded a little in the second half.

Ramsey  9.  Man of the match. Scored two goals (the second a peach) and assisted on the first goal. Every time he had the ball he looked dangerous. The Turks gave him time on the ball and if he’d played the full ninety minutes, we may have scored six.

Campbell  7.  Just his second start this season. Joel had one good chance to score, but the keeper made a good save. At times he tried to force the action. At other times he darted through their defence, but failed to spot open alternatives. His lack of pace compared to the Ox or Theo on the wing is noticeable as well.

Sanogo  6.  Assisted on the final goal of the evening. Yaya had one good chance, but it hit the arm of a defender and nothing was called. Another chance was hit at the keeper. His struggled and some things came off and other things didn’t. He became quite isolated as the game wore on.

Podolski 8.  If only we could teach Giroud, Yaya, and Welbeck to finish the way Poldi does. His first goal was a thing of beauty, a rocket into the back of the net. He worked hard for most of the evening and was rewarded at the end with another goal. Could have had a hat trick by halftime.

Zelalem  6.  I saw his passing stats (over 80%), but I only remember the giveaways. Much has been expected of this young man, but he didn’t stand out and he didn’t contribute as much energy to the cause as I’d hoped.

Maitland-Niles  6.  Did a competent job protecting the back. Mopped up a couple of difficult situations well. Caused one situation with a misplaced pass.

O’Connor  5.  A centre back trying to play right back. He was okay, but the Turks exploited his inexperience and made the last fifteen minutes a little uncomfortable.