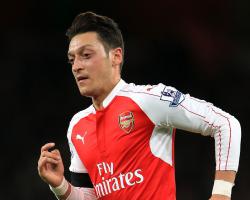 Manchester UnitedÃâs rejuvenated side take on a Sunderland team buoyed by their recent draw with Liverpool while Everton are looking to continue their surge up the table as they face an out of sorts West Brom.

However the game of the weekend is on Sunday

Chelsea would be playing Newcastle, a team that they have struggled against in the past while Manchester City would host Tottenham, the former one of the title favourites and the latter earmarked for future success. Instead, Chelsea are hovering above an embarrassing relegation battle while Manchester City trail Tottenham in the race for the title

It has been the most extraordinary Premier League season and the surprises show no signs of abating.

Instead Arsenal are looking to close the gap on Leicester, the team that was earmarked for a relegation battle and not a title win.

What more can be said about Leicester at this point? The well of unused superlatives is drying up with the Foxes subject to the most miraculous turnaround in Premier League history

LeicesterÃâs rise up the table has been well documented this season, but it has been stained by fan and pundit alike waiting for an apparent inevitable drop in form or injury crisis to derail their season

As of yet no such crisis has arisen

Instead, Leicester have gone from strength to strength with their 3-1 dismantling of title rivals Manchester City the latest glimpse of what they are capable of

Robert HuthÃâs superb looping header into the top corner of Joe HartÃâs goal was the moment Leicester fans and players began believing their teamÃâs name would be up in lights beside the European heavyweights, Barcelona, Real Madrid Bayern Munich..

With fifth place Manchester United languishing 12 points behind with 13 games to go, Leicester must now switch their gaze to a bigger prize, the Premier League title

While the pace of Vardy and the technical ability of Mahrez are hugely important to Leicester, the passing weeks have heralded the ever increasing importance of Kasper Schmeichel. The Dane has kept five clean sheets in his last seven games, helping Leicester to strengthen their defence, the weaker side of their game

His superb reflexes and commanding presence have helped to stem the influx of goals as the Foxes have now only conceded 27 goals in 25 games, only one more than Manchester City

If Leicester are going to continue their good form in their search of an unlikely title then the form of Schmeichel is incredibly important.

Petr Cech has already reportedly picked up 12 points for Arsenal this season with his saves against Liverpool, Newcastle, Tottenham and Sunderland all proving vitally important to ArsenalÃâs campaign

Like Schmeichel, CechÃâs shot stopping and commanding presence have been a welcomed addition to ArsenalÃâs back line and his title winning experience is giving the Gunners a dimension that they have longed for

It seems that this title clash may be decided in a battle of the keepers.

The midfielders, who has been side-lined since November with a knee injury, return would bring a stability and balance to ArsenalÃâs midfield which has been missing since he limped off against West Brom

The balance he provides is through a consistent defensive shield which allows the likes of Alexis Sanchez and Mesut Ozil to assign more time in the final third where their talents are best utilised.

The reverse fixture between the two sides back in September saw Arsenal run out 5-2 winners as Leicester tried to match the pace of ArsenalÃâs game, leaving too many spaces for the likes of Mesut Ozil to ghost in to

However playing away from home will only suit Leicester more

If Leicester can frustrate Arsenal though, then they are likely to commit more men forward leaving huge spaces in behind the defence where the pace of Vardy is most dangerous

As soon as Arsenal lose the ball the likes of Mahrez, Danny Drinkwater and NÃâgolo Kante will look to pick their heads up and look for a pass which allows Vardy to run off the shoulder of the defender. While the likes of Koscielny and Bellerin are quick, once Vardy has a yard on a defender then there is no catching the speedster.

In a season which has been so rife with shock defeats and moments of true magic, it makes this game incredibly difficult to predict

Being the home side gives Arsenal an advantage but Leicester showed last week that playing away will not change their style of play, it perhaps suits it more enabling them to soak up pressure for sustained periods before hitting teams on the break

The talents of Alexis Sanchez and Mesut Ozil will prove an enormous challenge for Leicester, but it was only last week that David Silva, Yaya Toure and Sergio Aguero were stifled so effectively

Any loose pass or sloppy defending will be pounced upon by Leicester but with the likes of Alexis Sanchez on the pitch Arsenal will fancy their chances at bringing the runaway leaders back down to earth with a bang.