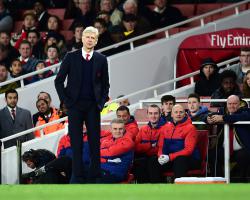 The top of the tree is reserved for the star, the brightest and most favoured decoration

Would it be the title favourites City or the rejuvenated Arsenal?

Incredibly enough it is neither

Leicester City, who were bottom of the League last Christmas, now sit top of the table, five points clear of second place Arsenal

It is an incredible story considering LeicesterÃâs position a year ago in comparison to today, where they boast a single defeat this season and the fact they are the LeagueÃâs top scorers with 37 goals, more than Barcelona (36)

With a Premier League season which has already had itÃâs fair share of upsets, no one will be betting their house on Arsenal or Manchester City overturning a large points deficit especially considering LeicesterÃâs form has shown no signs of abating

Considering they were widely tipped as the favourites before a ball was kicked this season, being in third place at Christmas will not be blessing Manuel Pellegrini with the soundest of nightÃâs sleep over the festive period

However City have struggled in recent weeks

While victory over Southampton provided slight respite, it has not arrested their recent poor form with their 2-0 loss against Stoke preceding an unconvincing victory against struggling Swansea

Injuries have decimated their first team with the likes of Sergio Aguero, David Silva, Yaya Toure and Vincent Kompany all spending time on the side-lines

This is especially pertinent when considering Wilfried Bony, Jesus Navas, Fernando and Martin Demichelis are their replacements

What is most interesting with regard to City is that without any one of Aguero, Silva, Toure or Kompany it completely destroys the balance in the team

Kompany is perhaps the most vital player to City though

Martin Demichelis, Eliaquim Mangala and Nicolas Otamendi have all tried to fill the gap left by their captain and have failed to do so

Either through their own technical deficiencies or their propensity to make mistakes, none have been able to truly stake their claim on the place

Until they can find a defender of the highest quality to partner Kompany, they will continue to struggle in Europe and domestically

With Arsenal seemingly out of the Champions League, two 1-1 draws with Tottenham and Norwich came either side of a 2-1 loss to West Brom which had Arsenal once again thinking their season would crumble by December

It seemed to be the same old story for Arsenal.

However in recent weeks things have changed

The loss of Alexis Sanchez would be enough to dent any teamÃâs title hopes, however Arsenal have picked up three wins in their last three games with a 3-1 victory over Sunderland before Olivier GiroudÃâs superb hat-trick saved the GunnerÃâs Champions League campaign in a 3-0 away win over Olympiacos

In conjunction with Cech is the magnificent form of Mesut Ozil

The injuries that have hit Arsenal this term seem to have been most prominent in midfield with Santi Cazorla, Francis Coquelin, Aaron Ramsey and Mikel Arteta all being forced out at some time this season

His direct running, silky footwork, abundance of goals and work ethic off the ball have made him one of the Premier LeagueÃâs most sought after talent

While injury has stunted SanchezÃâs scoring this term restricting him to six goals and a single assist in 14 Premier League games, it is clear that if Arsene Wenger can keep the Chilean fit then there is no reason why Arsenal canÃât challenge for the title this season.

Arsenal will hope to pile on the misery for City who in recent weeks who have looked vulnerable, most notably against Liverpool

This game may also see an abundance of offensive play and perhaps goals with a draw benefiting neither side in their quests to add the 201516 Premier League trophy to their cabinet.