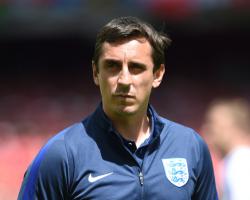 Wenger's position has been under increased scrutiny after Wednesday night's 5-1 thrashing at Bayern Munich.

He was already polarising the opinions of the Arsenal fanbase after hopes of a first Premier League title since 2004 fell by the wayside following two defeats in their last three domestic fixtures.

It was a 3-1 loss to league leaders Chelsea at Stamford Bridge which led to a supporter holding up a banner which read "Enough is enough, time to go".

Neville was working as a co-commentator for Sky Sports and the former Manchester United captain called fan Kane Hopps an "idiot" for taking the sign to the game.

It led to a row with supporters forum ArsenalFanTV, with Neville agreeing to appear on their YouTube channel as a result.

And during the interview he continued to defend Wenger, who said on Friday he will decide in March or April if he will leave the club at the end of the season when his contract expires.

"It's a unique one with Arsene Wenger, what he has achieved at the club, the greatest ever manager for Arsenal," he told ArsenalFanTV.

"His performance levels consistently for 20 years have been unbelievable

And you'd have to say, I do go along the line of, 'Be careful what you wish for'.

"Not in the sense that change isn't good, because it can be, but Arsenal's spending has been less than all the other clubs

"To continue to finish second, third, fourth over that period while still spending that much is an unbelievable achievement."

Neville then defended his use of the term "idiot" and felt it was disrespectful to Wenger, who has been in charge of Arsenal for over two decades.

"I'll be absolutely clear, there are very few things I've said on television that I've regretted, over five years," he said.

You're paying more attention to it than I think it's worth

But Wenger, who I have been very critical of in the past from a football point of view, I think he deserves better than that.

I could have said: 'That Arsenal fan is out of order' or 'I disagree with his opinion'.

"But everyone would have thought that was boring

I think really it's a lack of respect

He's a giant of the game.

"If he retired tomorrow, or something happened to him, there would probably be millions of people lining the streets for Arsene Wenger and what he has achieved."